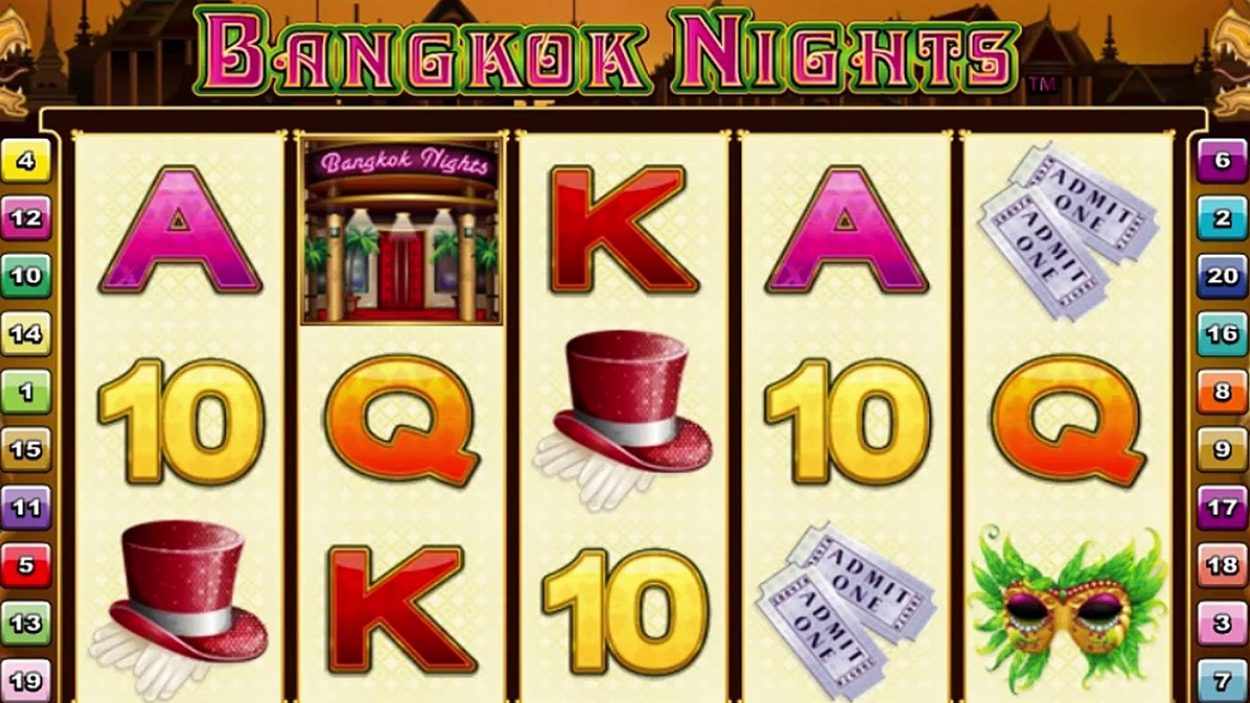 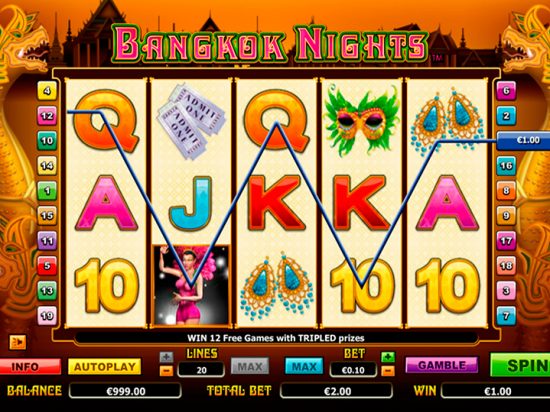 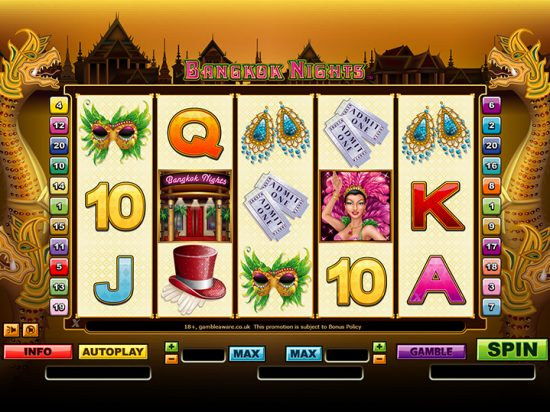 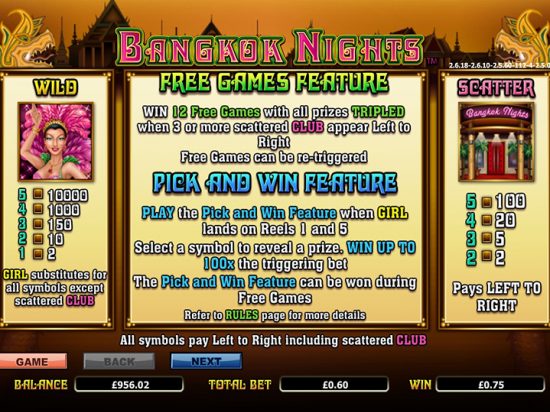 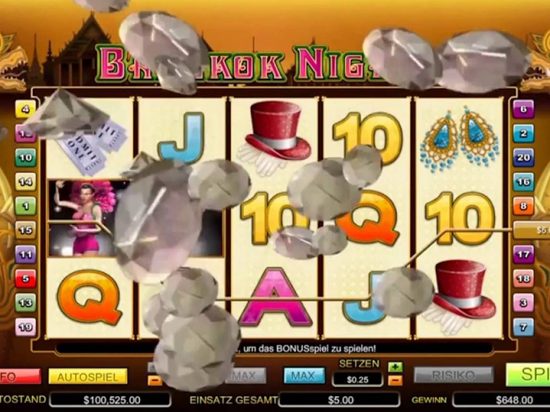 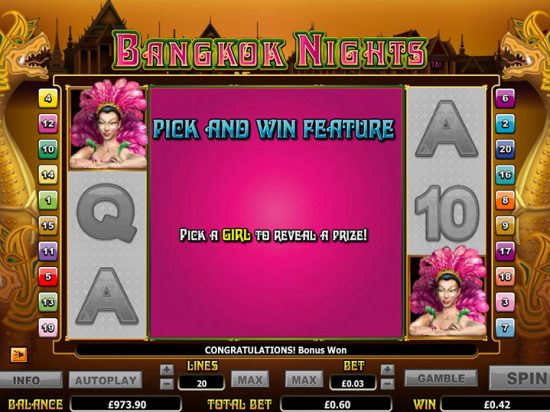 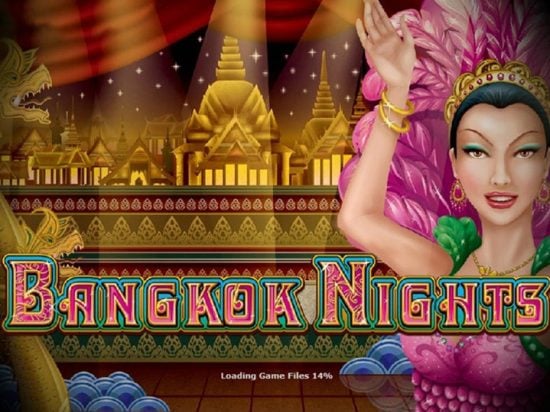 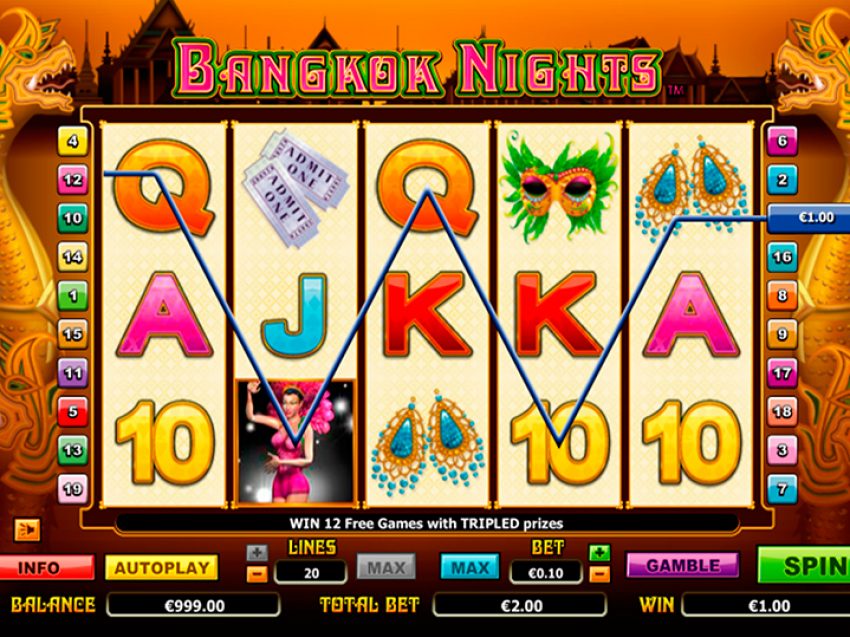 Known as the party capital of Asia, Bangkok makes a rich inspiration for a fun-loving online slot game. Surprisingly, many software developers have not used the Thai capital as a theme more often, which could have worked very well on Vegas type slots. That’s why NextGen Gaming is successful.

The developer is known for finding unique subject matter for its slots. Step into the Bangkok streets with us as we spin the reels on the Bangkok Nights slot.

NextGen takes a common approach with a 5x3 (five reels, three rows) setup, which means you can play Bangkok Nights across 25 paylines. Whether you bet big or are operating on a budget, this is a slot game that has you covered. Spin the reels for as little as $0.01 or get your high roller game going with a wager of $250 ($10 per line).

We would like to say that Bangkok Nights does the colorful and exuberant Thai capital justice, but it doesn’t quite cut it. For a party-themed slot, this is a rather bland aesthetic. Two dragons and an Asian temple serve as the backdrop, which is not animated. It all looks fine but feels impersonal.

Another frankly bizarre omission is the soundtrack - there isn’t one. Instead, you’ll hear just annoying clicks and reel-spinning sounds. Clearly, this kills immersion levels significantly, and for most of our time on Bangkok Nights, the mute button was firmly on.

The game picks up visually a little with the nice-looking symbols. Playing card symbols (10 to A) feature as low-paying icons, handing wins of 5x and 150X for landing three, four, or five times on the reels. Mid-level payers are diamond earrings, a top hat, and a face mask. We are not sure what these specifically have to do with Thailand, but they look good either way.

During the base game, you really need to land the dancing girl Wild symbol to win. This is where our Bangkok Nights review takes a turn to the positive because this Wild is just awesome. As usual, it will substitute any symbol aside from the scatter to help form winning runs. This Wild has a nice touch in that it will pay out wins on its own in the following way:

Aside from offering a considerable base game payout potential, the Wild will also open the Pick and Win bonus when she lands on reels 1 and 5. This simple game is a quick winner where you select one of the two Wilds to reveal a prize that reaches up to 100x your wager. You can change your pick if you don’t like the first offer.

The Bangkok Nights free spins round triggers with three or more nightclub scatter symbols. Here you get 12 free spins with a 3x multiplier on all wins. It is possible to retrigger this round one time for a total of 24 spins. The great news is the Pick and Win feature is also running during the free spins round. 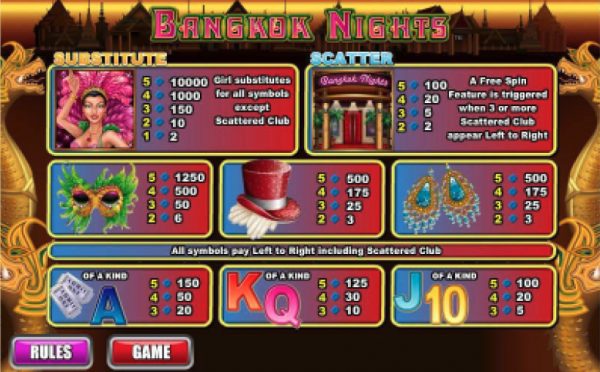