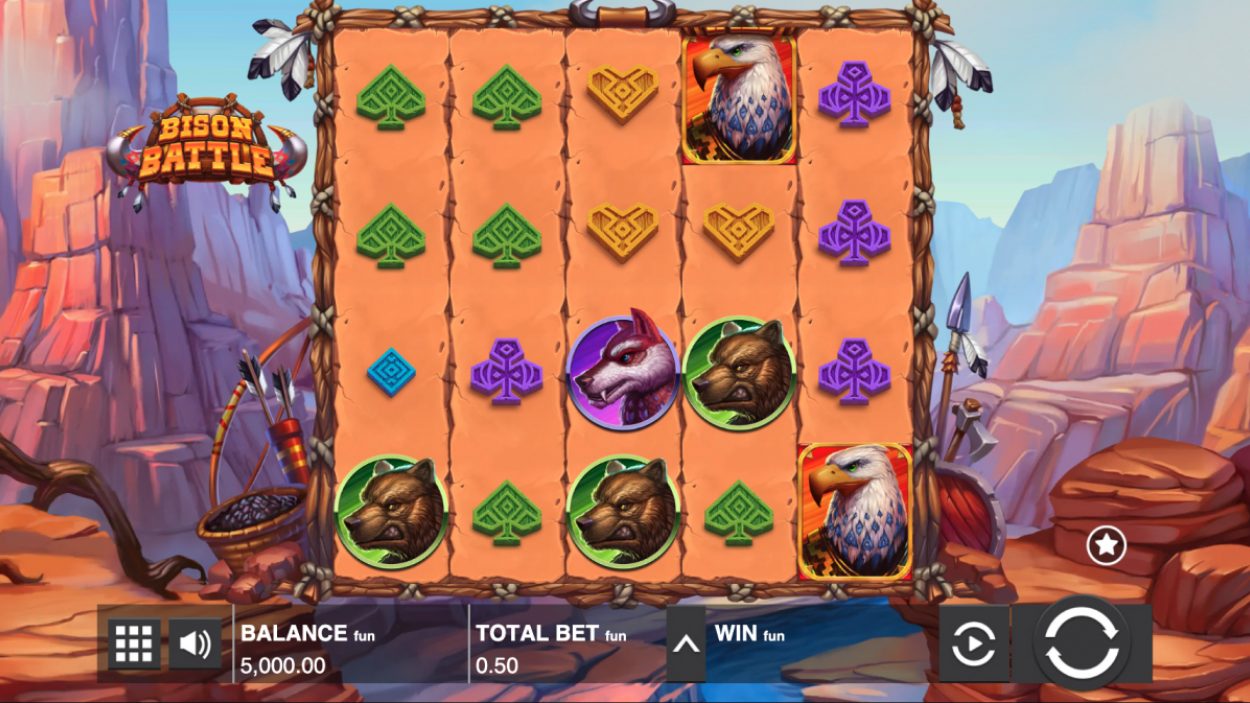 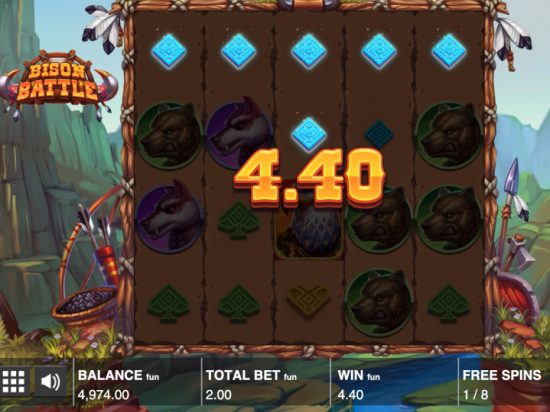 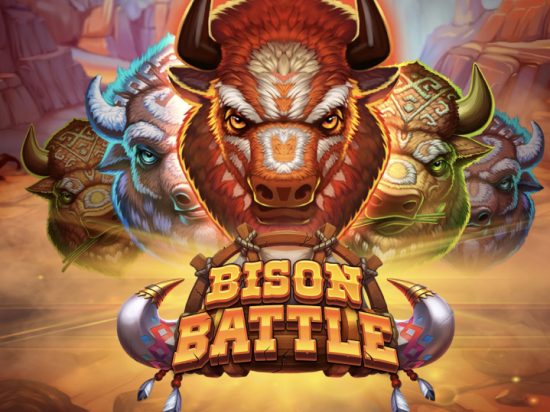 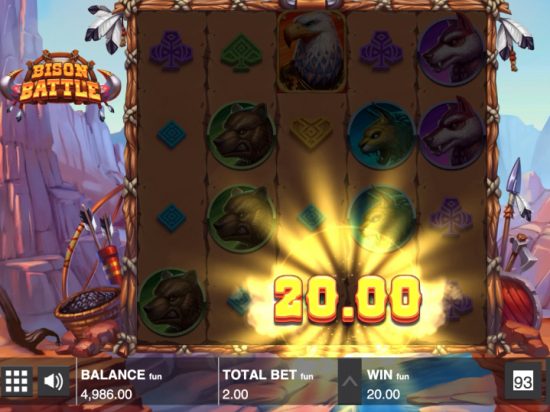 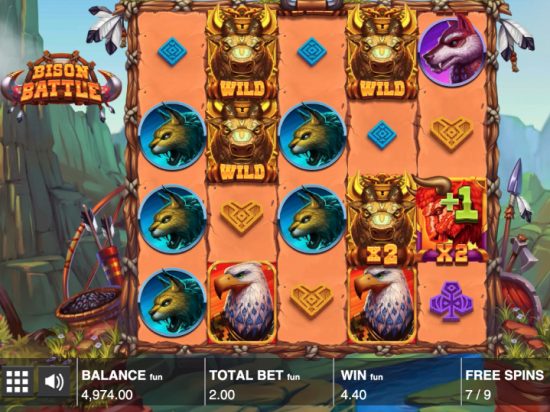 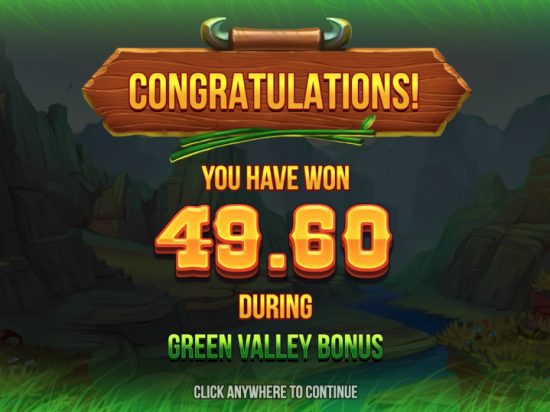 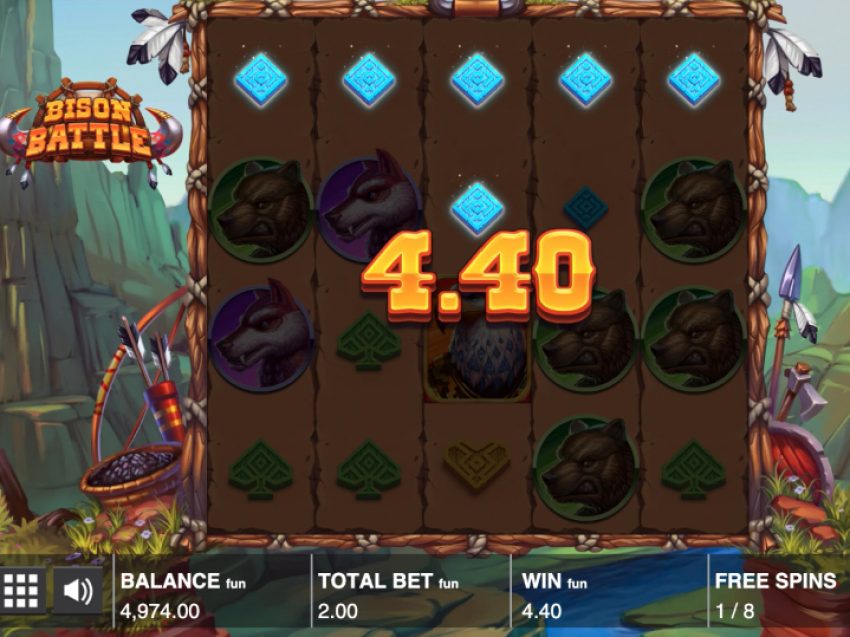 Combining a Native American theme with the frontier landscape, the Bison Battle slot has a familiar theme. Reels are set in a rocky canyon backdrop, but the detail and graphics shine through. For example, the beautiful way the canyon changes season during bonus rounds. Thanks to high-definition graphics and immersive audio, this is an attractive themed online slot.

Alongside bison, you will also see other animals like wolves, bears, eagles, and lynxes with playing card suits as low-value symbols. Set across five reels and four rows, Bison Battle offers 20 fixed paylines and provides modern features like Turbo Mode and Autoplay (only available in some markets).

With an RTP of 96.4%, you can expect a solid number of wins, but landing a big prize is more challenging. That’s because, despite the Bison Battle RTP, this plays as a high-volatility slot. Sure, the max potential win is 50,000x your total stake, but that is a one-in-a-million chance. Despite getting nowhere near a lucrative win, you can still have plenty of fun playing Bison Battle and picking up smaller prizes.

One reason for that enjoyment is the Bison Clash feature, which you can trigger yourself by landing the red bison scatter. It provides an instant multiplier-backed prize. Another interesting bonus is the Green Valley feature, transforming the canyon background into a lush landscape. You open this bonus by getting a green bison scatter and a red bison with a multiplier on the same row.

This bonus is the Bison Battle free spins round that grants you eight free spins with the potential for the red bison symbol to multiply wins by 2x, 3x, 4x, 5x, or 10x. However, the symbol will only appear on reels 1 and 5.

Finally, the Ice Park rounds out the feature-rich Bison Battle video slot transforming the canyon into a snowy wonderland. Here the blue bison scatter combines with the red bison on the same row to trigger the bonus. Ultimately, this leads you to 3 free spins with the red bison multiplier and Bison Coins on reels 2, 3, and 4. Coins are instant prices between 3x and 2,5000x your stake.

So, whether you are an outdoorsy type or a couch potato, go out to the American plains and hang out with the Bisons and other wildlife on the reels of Bison Battle! 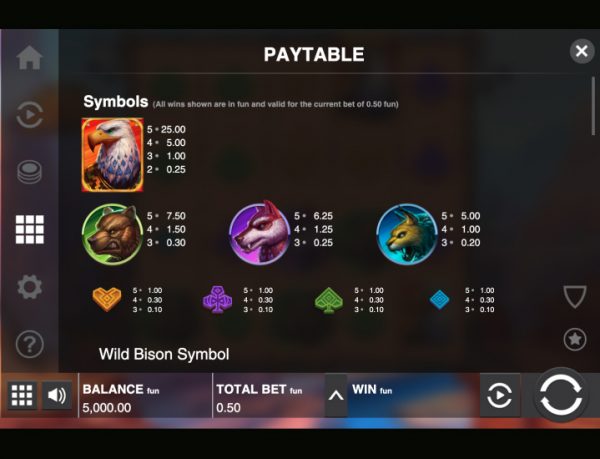