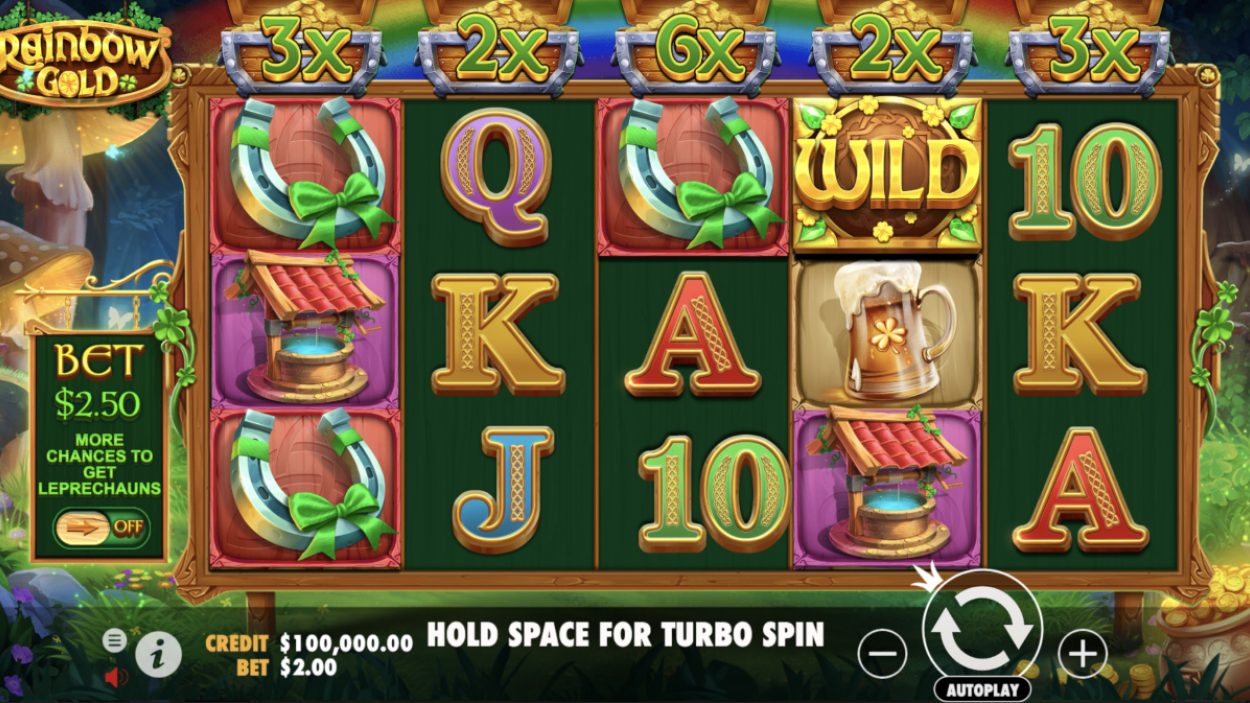 Rewards up to 8 free spins and multipliers 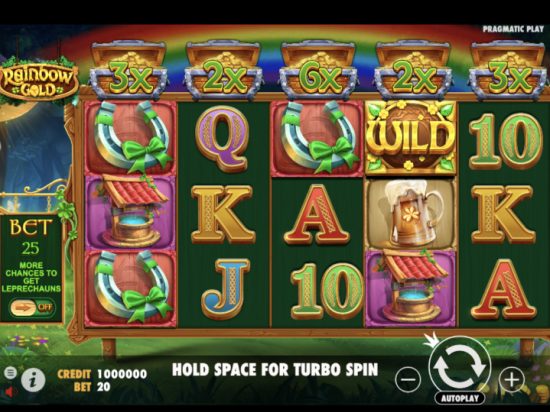 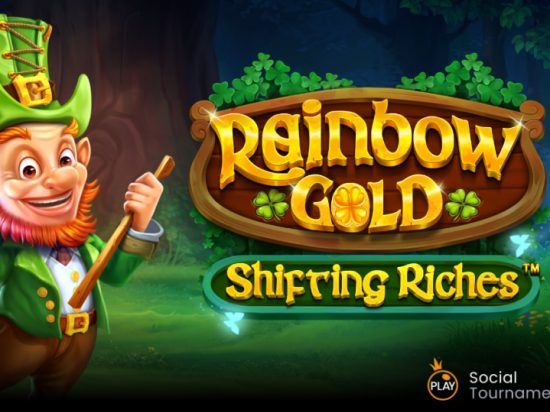 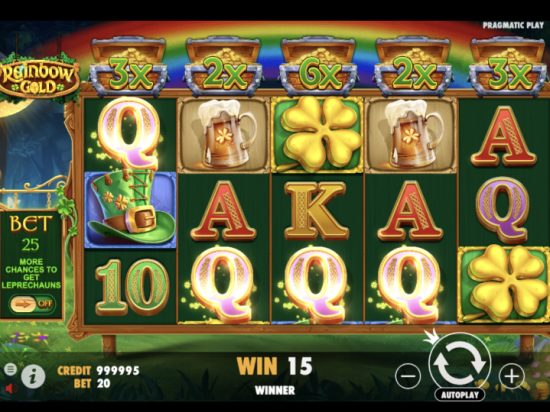 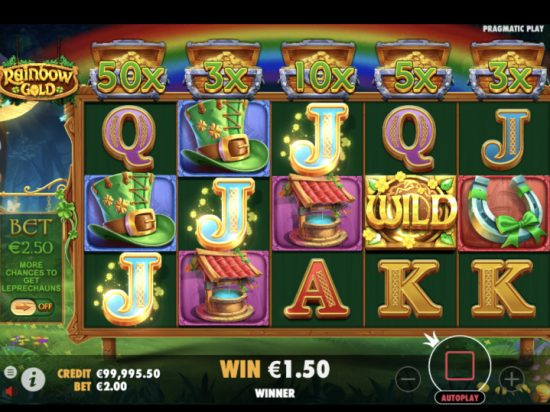 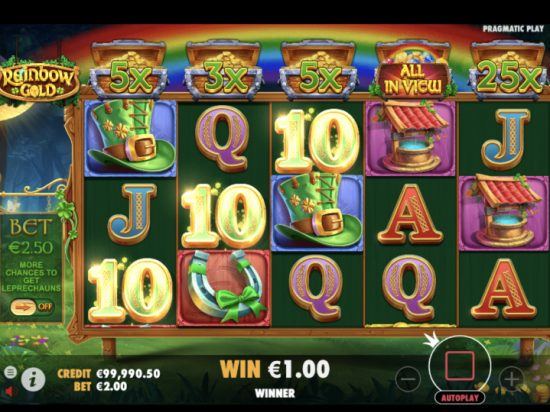 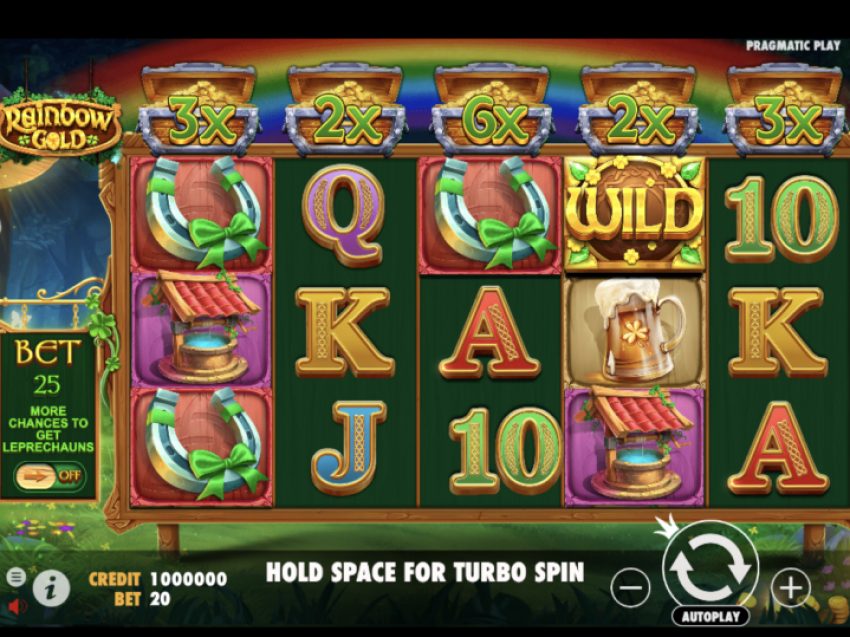 Gibraltar-based software provider Pragmatic Play is becoming a dominant force in the online slots market. So, we got used to getting from Pragmatic Play a steady stream of fantastic slots with sharp graphics, innovative features, and immersive gameplay.

Rainbow Gold was released in 2022. It tries to turn the Irish luck theme from cliché to classic with an exciting new twist. But here’s a challenge, even for a shrewd developer like Pragmatic Play: Irish luck slots have been done from here to the end of the rainbow and back. Can anyone really create a slot in this genre that we haven’t seen before? Join us on the reels of Rainbow Gold to find out.

As soon as we uploaded the game, we knew exactly where we were (some Irish wonderland? The end of the rainbow? You get the idea). There’s no mistaking the Irish theme. After being invited in by the friendly leprechaun (did we mention before it’s an Irish slot?), we found a 5x3 game grid nestled within a lush green backdrop. The soundtrack’s lilting melody creates a relaxing atmosphere, in contrast to the frantic Celtic ditties that often dominate this type of themed game. The temple bar font is a nod to the signs of traditional Irish pubs, emphasized further by the foamy beer symbols.

You’ll find that other stereotypical Irish symbols are unavoidable here, with horseshoes, leprechaun hats, four-leaf clovers, and wishing wells making up the high-paying symbols. While we can forgive the low-paying symbols for being unexciting letters and numbers, the wild - which just says ‘WILD’ - is rather unimaginative. However, when the wild substitutes for other pay symbols to form winning combinations, you don’t really care how it looks.

Unlike many Irish-themed slots, the leprechaun is not at the forefront of the game. The leprechaun only features as a game symbol on the reels instead of dancing around gleefully in the background. The top tracker prize on that reel is unlocked when this symbol appears. Now, this is where it gets interesting.

Top tracker prizes contain generous rewards, including an All-in-View prize, Super free spins, or a direct monetary reward of 2x to 100x your bet. Naturally, the chances of unlocking a top prize are not as high. Rainbow Gold slot offers an enticing feature for high rolling players to literally up the ante with the Ante Bet option. By activating the Ante Bet, players can increase the multiplier 25x and lure more leprechauns to the reels.

Winning the Super Free Spins tracker prize unlocks the bonus game, which contains three extra 5x3 grids and a minimum of eight free spins. The Super Free Spins round is where you’ll see the biggest and most frequent payouts. Prizes in the bonus round include a direct money prize of 2x to 500x your bet, an All-in-View or Super All-in-View prize, additional free spins, or a Rainbow Boost that unlocks extra reels.

This high-volatility slot comes with a 96.45% RTP (return to player). The $0.20 minimum bet will attract casual players looking to boost their bankroll, though the game’s high variance means you’ll need to play for longer to really fill your pot of gold.

While Rainbow Gold doesn’t redefine the genre, the tracker prizes certainly add an exciting new element to the Irish luck theme. The 5,000x maximum win may not attract high rollers, but the Ante Bet option and unlockable bonus round surely will. With its low minimum bet of $0.20 and maximum of $125, we’d recommend Rainbow Gold to casual players and high rollers alike. 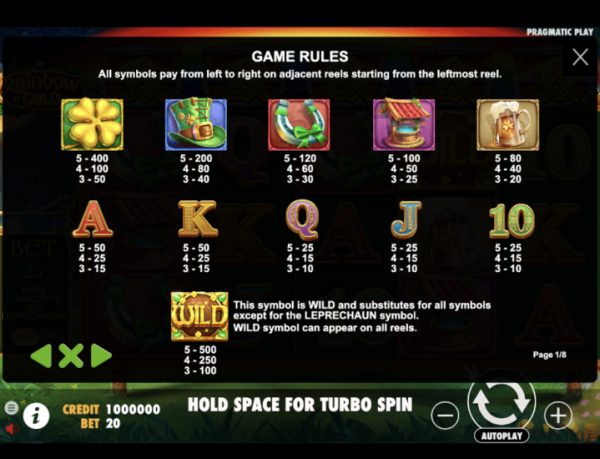