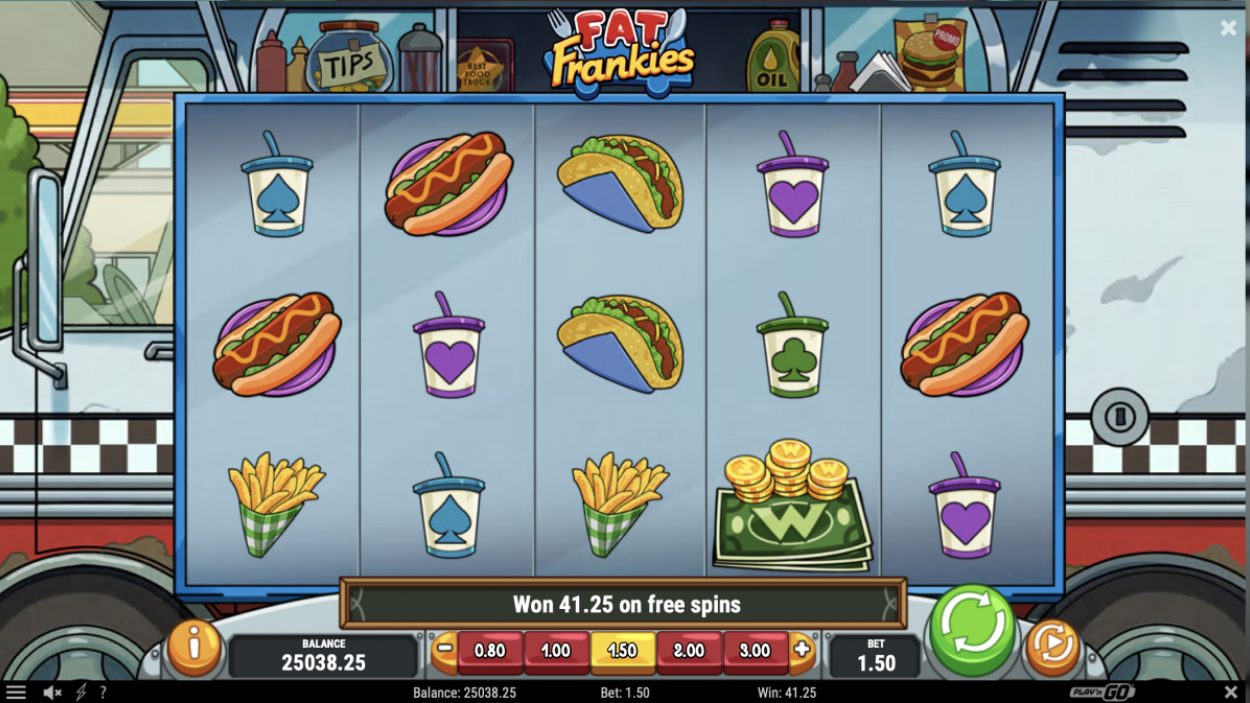 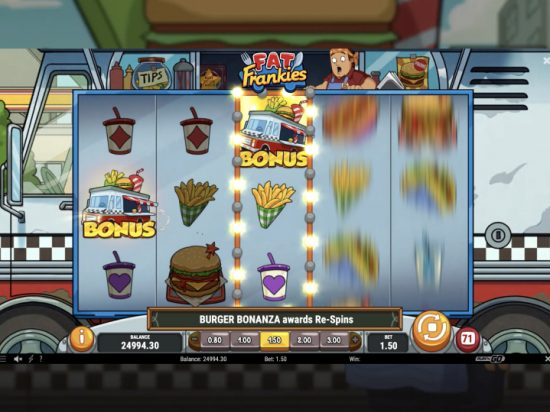 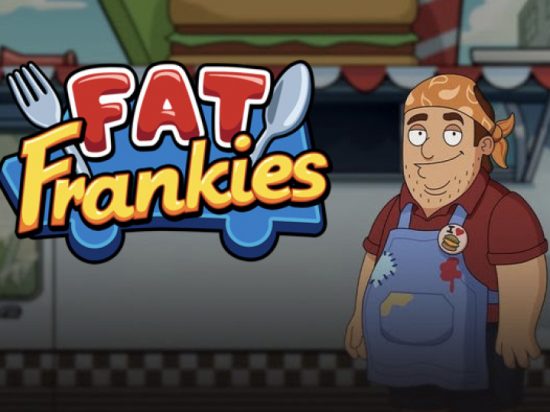 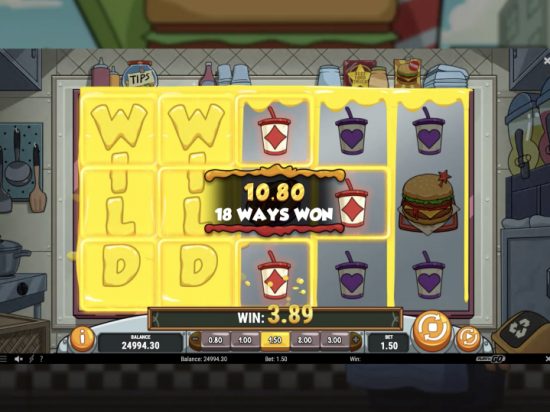 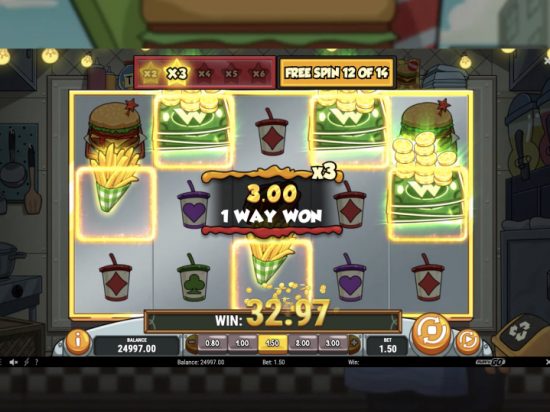 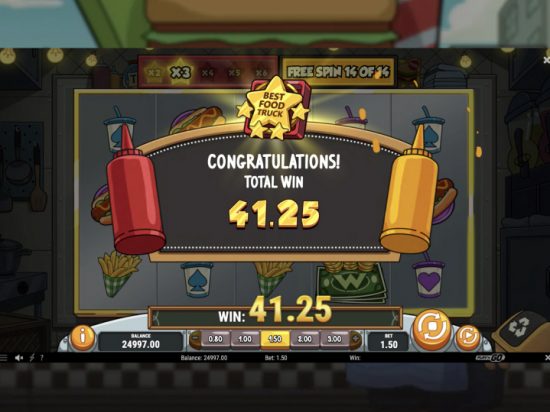 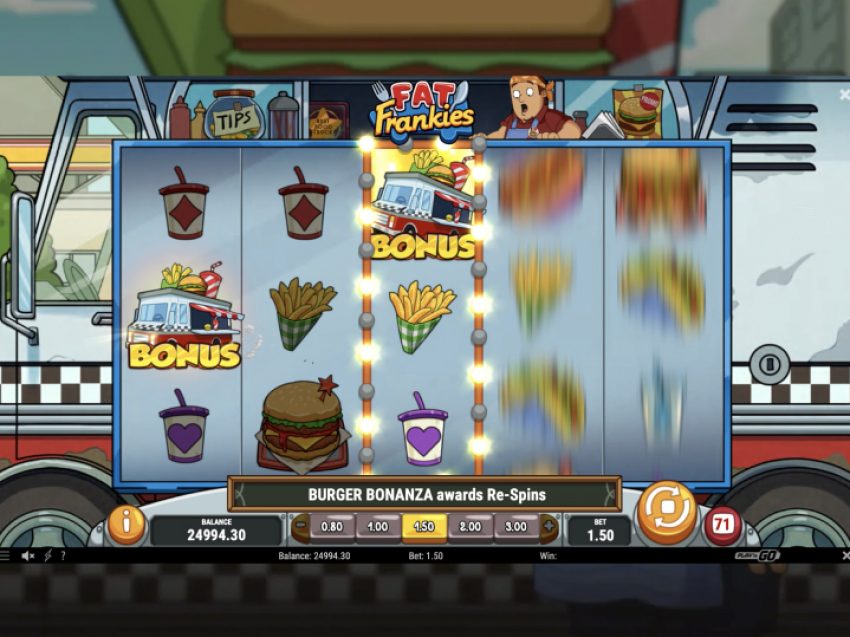 Considering Play’n GO penchant for fruit-themed slots, it’s refreshing to see that even the biggest providers need a cheat day. Released in 2022 by the Swedish developer, Fat Frankies is an interactive junk food-themed slot with a host of entertaining features. Since its inception in 1997, Play’n GO has built up a reputation for producing games with high-quality visuals and impressive attention to detail, and Fat Frankies certainly follows suit. Join us as we venture down to Frankie’s food truck and sample the menu!

Inspired by the popularity of cartoon TV comedies, Fat Frankie’s cartoonish humor and fast food theme is a recipe for success. Right from the beginning, you are completely immersed in Frankie’s world. The intro alone could have been lifted straight from an episode of Bob’s Burgers, and Frankie’s frequent commentary turns you from player to hungry customer. The classic 5x3 grid configuration sits in front of Frankie’s truck and above bet buttons and a revolving banner that describes how to activate the bonus rounds.

Aside from its immersive theme, the base game is pretty simplistic. There are 243 paylines, so players have several opportunities to score a winning combination. High-paying symbols are made up of various greasy foods, including a burger, a hotdog, a taco, and fries. The meal is not complete without low-paying symbols, consisting of soda cups in royal suits. While not the most exciting visuals, the graphics are high-quality, and the symbols work well in tying together the fast food theme.

The base game also includes a number of exclusive features to enhance your gameplay. The wild symbol is a pile of cash and can substitute for any symbol across the grid except bonus and star symbols. Frankie’s truck is used as the bonus scatter symbol, and landing three scatters across the reels will trigger one of four features known as Frankie’s Specials. These special features include Burger Bonanza, Flip the Tip, Greasy Wilds, and 5 Star Spins.

When Burger Bonanza is activated, sticky burger symbols will fall. Landing one or more sticky symbols will award you with a re-spin. Flip the Tip, an interactive mini-game, requires you to flip coins into a tip jar until you run out of coins or achieve the maximum prize.

The Greasy Wilds feature adds between 1-5 wild reels to the grid, with a multiplier of x3, x4, or x5. In this game, you have the potential to win up to 2,430x your stake on a single spin. The fourth and final special feature, 5 Star Spins, awards you with 10 initial free spins, though you can win a maximum of 20 throughout the game.

Accompanied by humorous visuals of the man himself, Frankie’s Specials are obviously the starring feature of this slot. Spins in the base game are relatively slow and unexciting, so we recommend using either the autospin or hyperspin feature to arrive at the bonus round faster. Which of Frankie’s Specials you land on is determined by chance, although with such a great selection of bonus games, we were happy whatever the outcome.

Fat Frankies is a medium volatility slot with an adjustable RTP that can reach a maximum of 96.2%. The combination of medium variance and average RTP means that you probably won’t be scoring big wins in the base game. However, there is potential to win up to 6,000x your stake in the bonus rounds (a pretty generous figure for a medium volatility game). For this reason, we recommend Fat Frankies to more casual players who seek entertainment value over a boosted bankroll. With a minimum bet of 0.10 coins, the online slot is ideal for bettors on a budget.

So, make today your cheat day and head down to Fat Frankie’s food truck - your waistline may regret it, but you won’t! 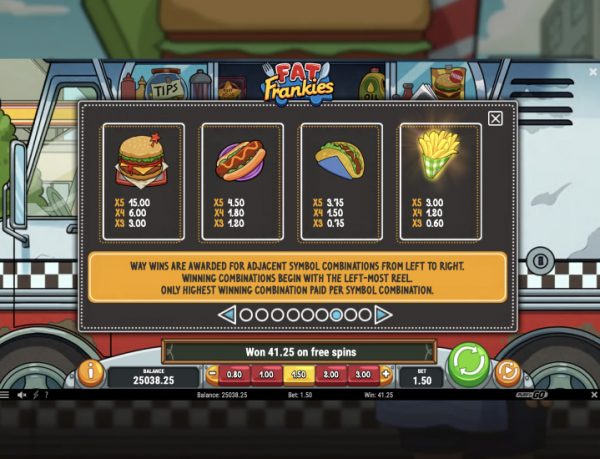