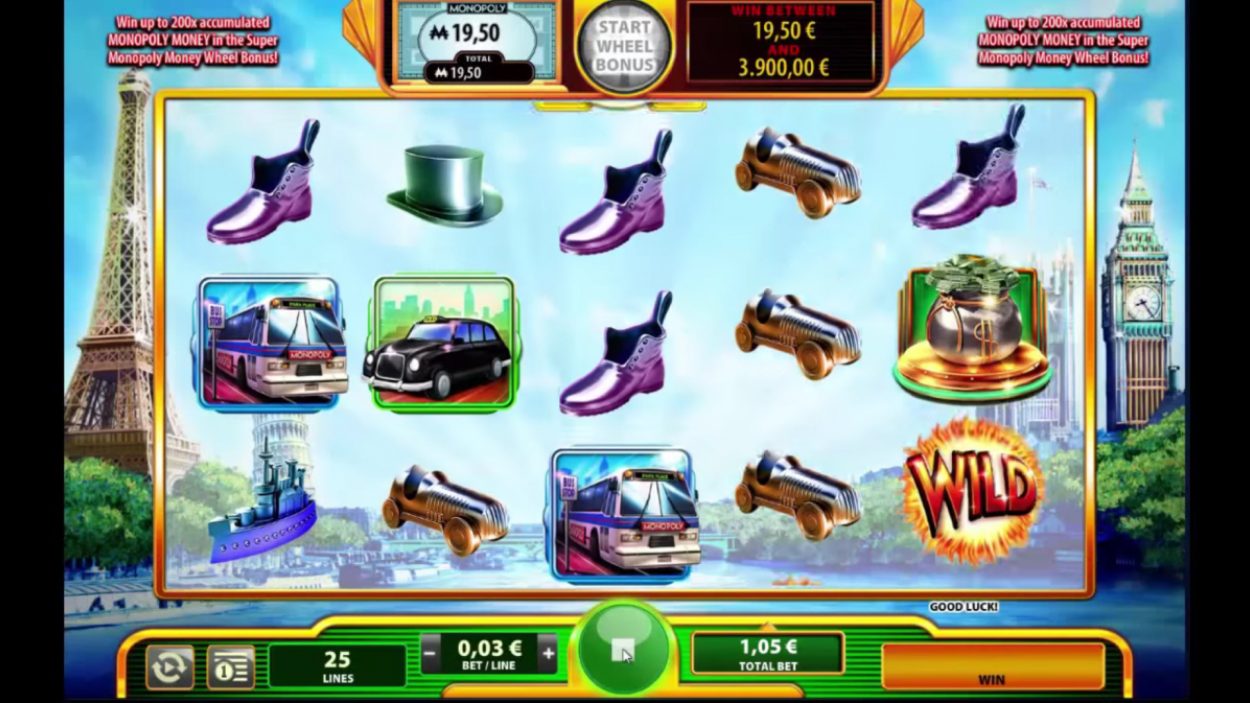 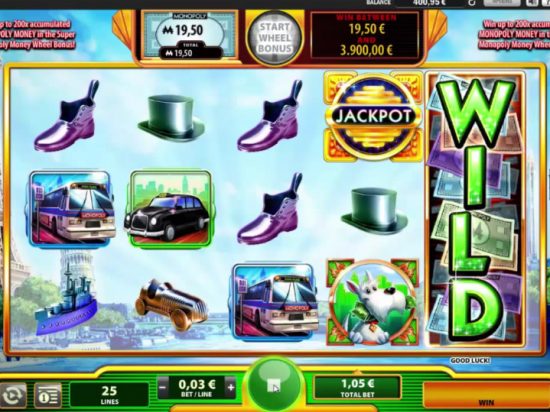 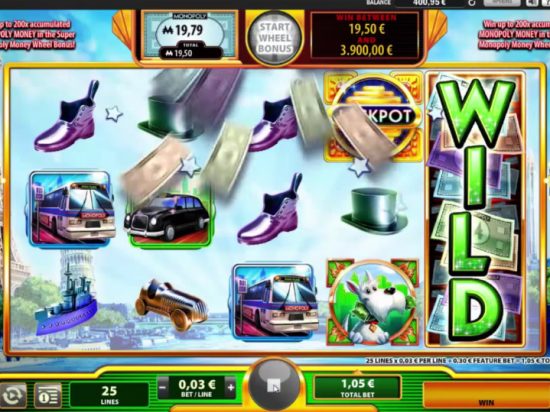 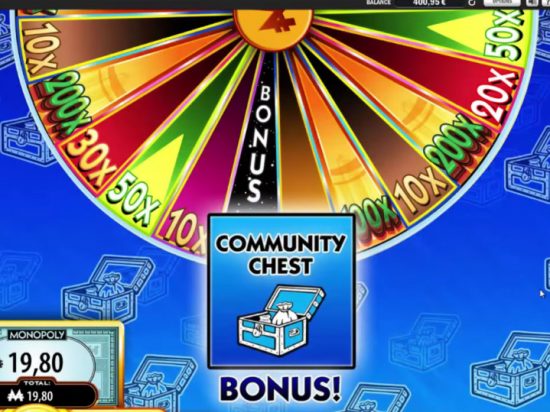 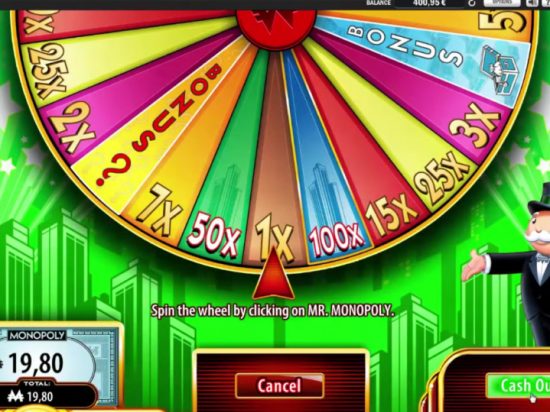 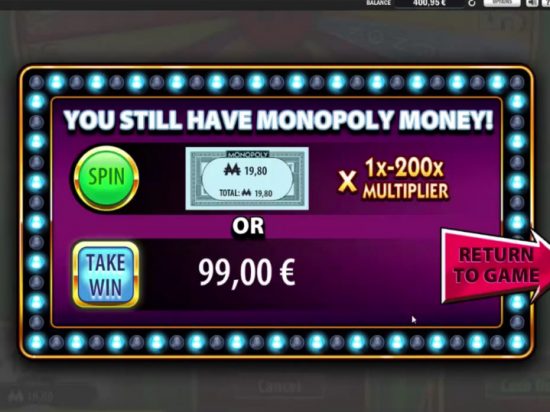 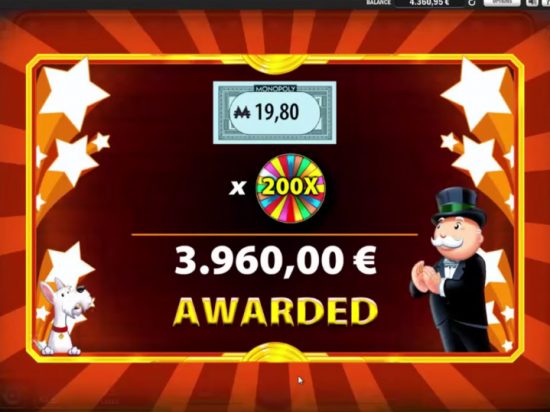 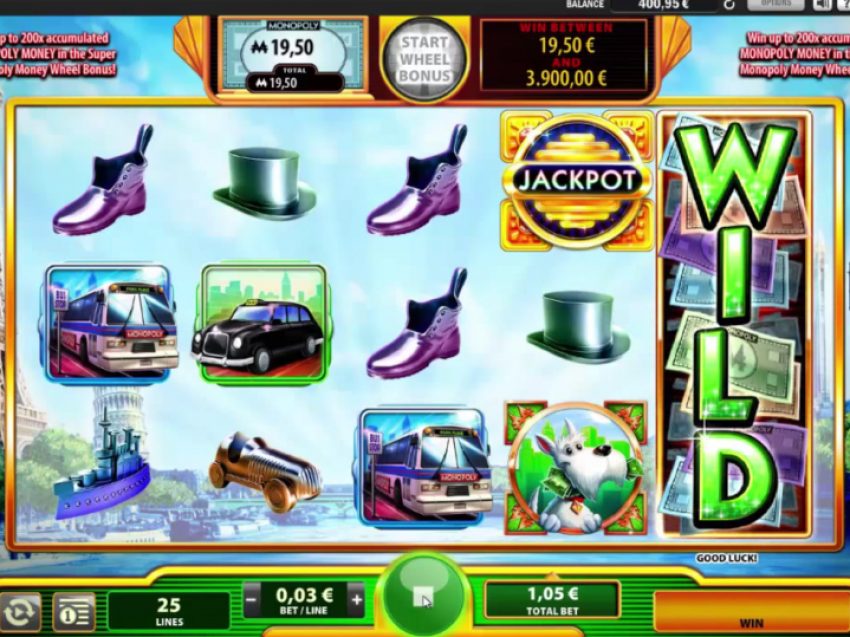 Launched by WMS in 2015, Super Monopoly Money is a slot adaptation of the classic Monopoly board game. Stirring up arguments since its original release in 1935, Monopoly has a host of recognizable features that lend themselves well to online gaming. And with over three decades in the industry, who better to recreate the beloved board game than WMS Gaming? The developer is known for its player-centric games, having won the Award for Player-Focused Products in 2008. So, settle down, grab your game piece, and join us as we spin the reels of Super Monopoly Money.

After a brisk welcome from Mr. Monopoly (and after wondering why Big Ben and the Eiffel Tower are on the same landmass), you’ll find the gold-trimmed 5x3 grid brimming with recognizable visuals. Original game pieces make up the low-paying symbols, including the boat, the top hat, the boot, and the race car. Medium-paying symbols consist of a bus, a black cab, and a pot of gold, while the highest-paying symbols are characters like Mr. Monopoly and his dog.

If you’ve ever played Monopoly, you’ll know that what starts as a fun group activity can quickly turn into a drawn-out game with no end in sight. It seems WMS was trying to create an authentic experience with the slow speed of its base game spins. With no turbo mode available, this may end up deterring impatient players. Fortunately, there are several paying features to grab your attention, including Free Parking, wild and bonus symbols, MM Wild and bonus symbols, a free spins bonus, and the jackpot.

The Free Parking feature is triggered whenever a parking space lands on the reels. You’ll then choose one of five Free Park symbols that contain a wild, an MM Bonus, and three low-paying symbols. Whichever you choose will replace Free Park to hopefully form a win. Meanwhile, the free spins feature is triggered when you land three or more regular or MM bonus symbols on a winning payline. Landing 3, 4, or 5 bonus symbols will reward you with 8, 10, or 15 free spins. Finally, landing five clean jackpot symbols (as opposed to a combination of jackpot symbols and a wild) will trigger the jackpot bonus, where you can win up to 17,857x your stake.

Monopoly Money grants you access to the Bonus Wheel, where you can transform the imaginary currency into withdrawable cash winnings (a feature we wish existed in the real-life game). The wheel features multipliers ranging from 1x to 100x. There are also three bonus segments the wheel could land on: Chance, Community Chest, and Go! Re-Spin.

If you land on Chance, you’ll choose between three cards containing multipliers from 5x to 10x or select the Go! Re-Spin option. If the wheel lands on Chance during a re-spin, the multiplier range expands, offering 10x to 200x. Alternatively, landing on a Community Chest allows you to choose between 12 cards containing a multiplier from 1x to 25x. Like the Chance Re-Spin option, landing directly on the Go! Re-Spin segment of the wheel gives you a multiplier anywhere between 10x and 200x.

Super Monopoly Money is a medium-to-high volatility slot with a 95.97% RTP. Though you may feel like you’re playing longer without a big payout, the base game features and Bonus Wheel will make securing a win feel more in reach.

While the minimum bet of $0.35 may appeal to beginners, the sheer volume of bonus features may be overwhelming. Instead, we think the slot would be an excellent choice for casual players with some experience under their belt looking for light entertainment and a familiar theme. Similarly, the medium-to-high volatility and maximum bet of $105 could suit high rollers willing to overlook the slow spin speed. Play the Super Monopoly Money slot at a top casino today for some nostalgic fun! 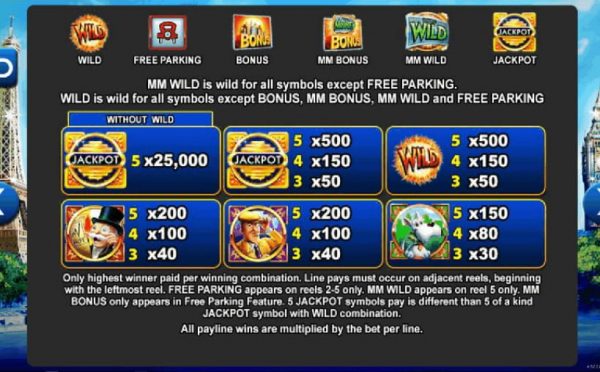