Does Your Personality Influence Your Gaming Preferences?

When you “choose your fighter” in a game, do you think your real-life personality typically shines through that selection? Now, take a step back in time to when you chose the game – do you think that choice says a little bit about who you are? Now go back even further to when you selected the game console. Are all these types of gaming preferences reflected in the person enjoying them?

As it turns out, the answer to all of these questions is often yes; personalities really do shine through different types of gamers. We know this now, as we spoke to more than 1,000 people who actively game every single day, or nearly every day. This experienced group of gamers first answered questions from a shortened Big Five Inventory personality test, which ultimately revealed some major correlations between personality types and gaming preferences. Curious to know what your preference for PlayStation over Xbox says about you? Or what a love for racing vs. first-person shooters says about your mindset? Keep scrolling to find out.

The study started with a look into the "Big Five" personality traits that our avid gamers typically fell into. These personality types were analyzed overall, but also crossed against the gaming consoles that each gamer had chosen. 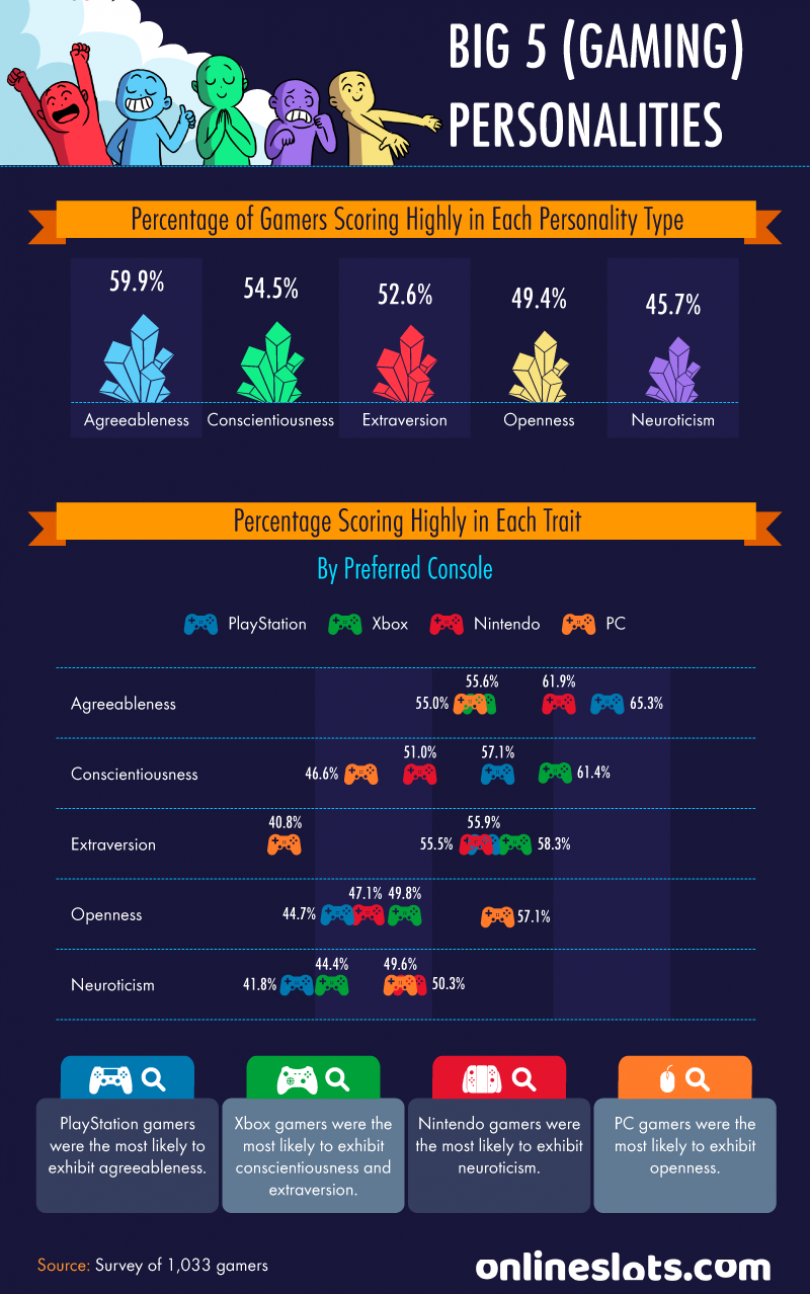 Overall, gamers were most likely to rank high in agreeableness, meaning they typically show a great deal of care for other people, often feel empathy, and enjoy contributing to the happiness of others. More than half also ranked high in conscientiousness, which indicates they spend time preparing for their endeavors, pay close attention to detail, and enjoy having a consistent schedule. What gamers often didn't score highly in, however, was neuroticism. These low scores may indicate that gamers deal well with stress and tend not to worry too much. Some psychologists have suggested that video games do help players destress and relax – a finding this study reinforces.

While gamers overall did tend toward a relaxed attitude, Nintendo gamers were the most likely to display neurotic traits such as stress, worry, and anxiety. Fifty percent of Nintendo players scored highly for the neuroticism trait, compared to just 41% of PlayStation gamers. On the other hand, Xbox players ranked highly for conscientiousness and extraversion, or a likelihood of being the center of attention, wanting to meet new people, and paying attention to detail. PlayStation gamers were the most agreeable, or at least scored highest for this trait. This indicates tendencies toward altruism, empathy, and assistance for those in need were more common among PlayStation players than any other type of gamer.

Roles, genres, and emotions were all taken into account as well. Each gamer was allowed to pick between the gaming roles they preferred (attacking, defending, or supporting), the genres of games they preferred (e.g., sports, adventure), and lastly, what mattered most to them while playing (e.g., excitement or challenge).

PlayStation and Xbox gamers may have more in common than their notorious rivalry would suggest: The two shared a particular affinity for attacking roles in gameplay. In the Xbox Games Store, some of the most popular games include Fortnite, Call of Duty, and Grand Theft Auto. Over at the PlayStation Store, you'll find quite a bit of overlap: Call of Duty and Grand Theft Auto ranked as their top games as well, in addition to other violent titles like Assassin's Creed and Red Dead Redemption.

Similarities between PlayStation and Xbox gamers continued once they shared what mattered most in a video game. Both console fans most wanted excitement, followed by challenge, and a little bit of story. Nintendo and PC gamers instead preferred story above excitement and strategy. For the Nintendo Switch specifically, the store's most popular games are mostly story-related. Animal Crossing in particular skyrocketed to fame and essentially replaced real-life communities when people were forced into quarantine.

Every gamer in the study also revealed how much money they had spent on video games and downloadable content (often referred to as DLC). This was averaged for a monthly spending amount by each type of console preference. Time was also a considerable cost for many, which was analyzed weekly.

Over the course of the last month, PlayStation Gamers had spent the most money on both video games ($63) and downloadable content ($35). The PlayStation Store's games range from $199.99 for the Assassin's Creed Legendary Collection to $0 for the many free editions of downloadable games. These players appeared to spend more readily than other gamers, in spite of the free options.

If you're wondering whose time was most well spent, the fact that PlayStation and Xbox gamers "rage quit" the most often could give you an idea. Forty percent of PlayStation players and 34.1% of Xbox players said they frequently quit a game in a fit of rage. PC gamers were more … PC.

Aspiring professional gamers were most likely to be PlayStation players. Forty-five percent, nearly half of PlayStation loyalists, hoped they would go pro at some point. Revenues in esports increased 27% last year to total $1.1 billion, with single-game cash earnings sometimes hitting $200,000. Professional gaming certainly has become aspirational in this sense.

Before we closed our study, we wanted to see if there were any differences in particular habits (both good and bad) among gamers. Both certainly surfaced, with habits ranging from staying hydrated to smoking cigarettes and marijuana being crossed against their gaming console preference. 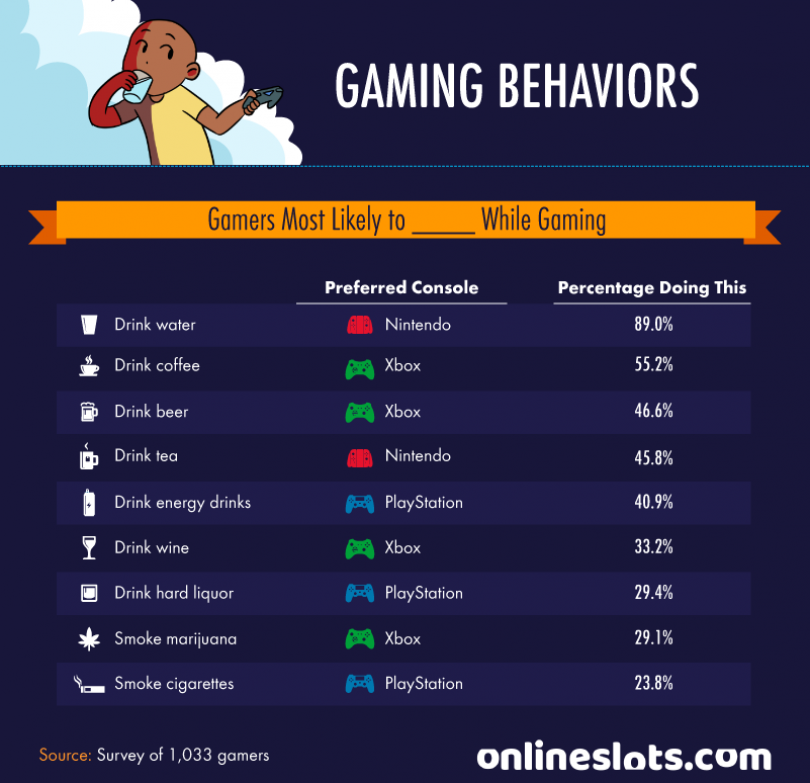 Nintendo gamers had the healthiest habits, at least as far as drinking was concerned. They were the most likely to stay hydrated and drink water (89%) as well as tea (45.8%) while gaming. PlayStation gamers, on the other hand, most often opted for energy drinks (40.9%), hard liquor (29.4%), and cigarettes (23.8%).

The Heart of a Gamer

The study ultimately sought to understand the personality of a gamer, and it seems the players using each console really did gravitate toward specific preferences as a group. Xbox and PlayStation players loved the attacking roles in games and ranked high for extraversion, while Nintendo and PC enjoyed the story and had fewer "rage-quits." Money and PlayStation went hand in hand, while Xbox players seemed to have the most non-game vices.

Beyond individual consoles, gamers overall were likely to portray some of the most redeemable qualities. They expressed high levels of agreeableness and conscientiousness, meaning they care deeply about others and have great attention to detail. That means gamers are likely to assist those in need and spend time preparing for important tasks. To put it simply, gamers are great people offscreen.

For this project, we administered online surveys to 1,033 avid gamers via Amazon Mechanical Turk. To qualify for this study, respondents were required to indicate gaming every day or almost every day.

We used a short version of the Big Five Inventory to measure each gamer's personality trait from:

The sample sizes for preferred consoles are as follows:

Among respondents, 41% identified as female, and 58% identified as male. Respondents ranged in age from 21 to 58 with an average of 34 and a standard deviation of nine years. An attention-check question was used to help ensure respondents read, listened, and answered all questions in their entirety. Respondents who failed to answer this question correctly were quickly identified and disqualified. The main limitation of this study is that the data relies on self-report. Self-reported responses are typically faced with several issues such as, but not limited to, the following: attribution, exaggeration, telescoping, and recency bias.

Feeling like you've learned something new about the gaming community? We'd love for you to share your findings, but we do ask that your purposes are noncommercial and that you link back to this page so its authors can receive proper credit for their work.