Few industries were lucky enough to be favourably impacted by COVID-19. Even fewer were as fortunate as the esports industry, which reached an entirely new level of success thanks in part to the pandemic – it helped accelerate already existing trends within the industry. The players have truly become professional, highly-paid athletes in their own right and have also gained similar renown.

One of the clearest ways to measure a celebrity today is through social media numbers, so we pulled them for the top esports players and were able to draw some interesting conclusions. Yes, some esports players, teams, and games have incredibly popular Instagrams with an engaged, energetic fan base, but would this social following impact the amount of money the player is able to earn? In other words, how do social media followers impact esports earnings? Keep reading to find out.

Who Are the Most Popular Esports Players on Instagram?

According to Amol Bharti, founder of one of India's biggest esports platforms Drag2Death, social media is an integral part of any esports player's career. In his words, "social media is the most essential part of esports." Specifically focusing on Instagram, we began our study by looking at the top 25 esports stars among the top 200 highest earners, by number of followers. 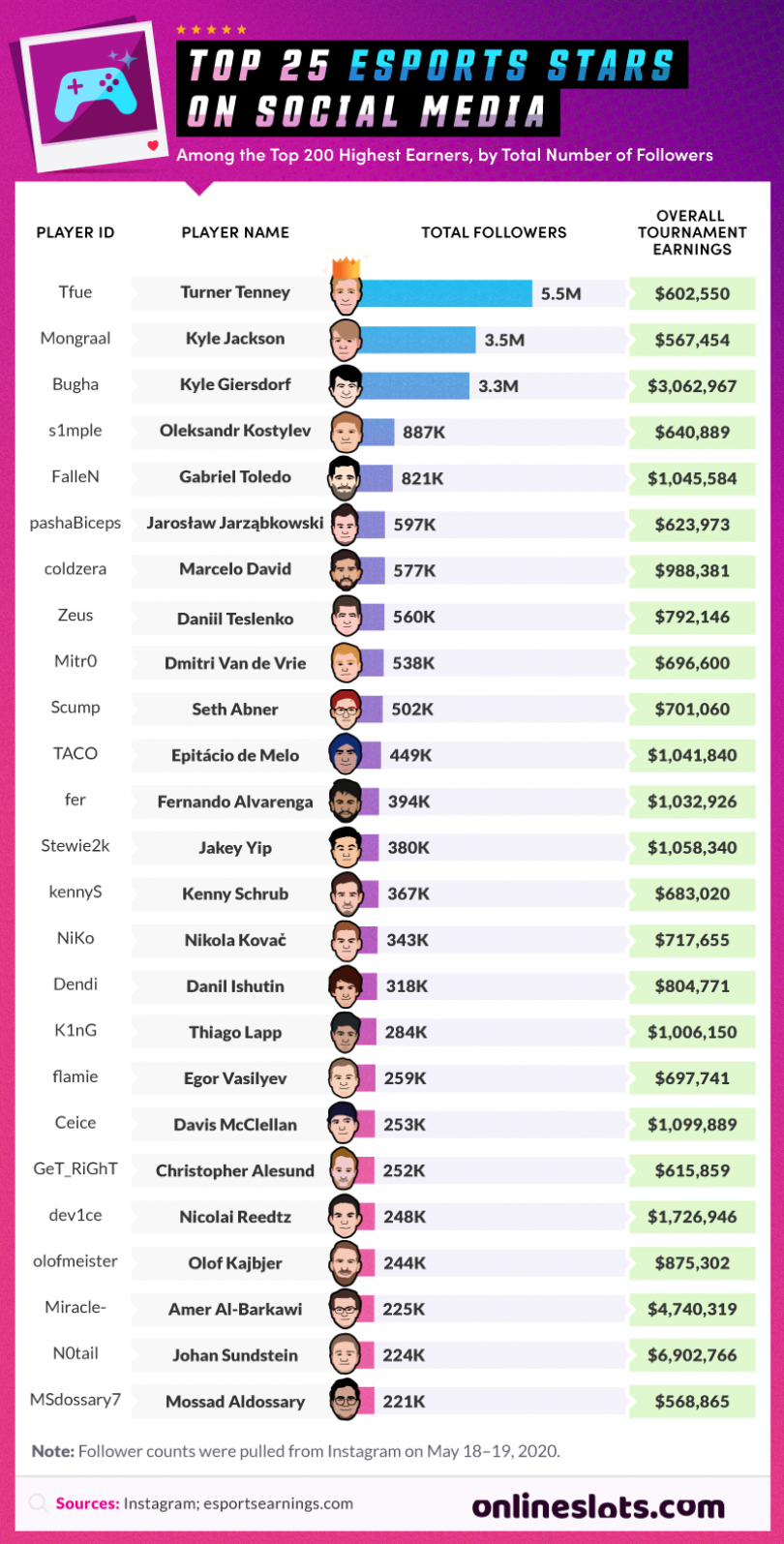 Turney Tenney's Instagram was more followed than any other esports player with a total of 5.5 million followers. Often called Tfue, Tenney also has over 1 billion views on YouTube and is most known for playing Fortnite, though he's only been gaming for just a few years. Kyle Jackson was the next most followed player, with 3.8 million followers. In spite of the massive social success of these two players and others, the tournament winnings didn't seem to correlate positively, meaning more social media fans didn't directly increase the amount of money that was won.

Of the top 25 most-followed esports players in this subset, it was actually the 24th-most-followed who was earning the most money. At the time of writing this, Johan Sundstein had just 224,000 followers on Instagram, but had already earned nearly $7 million in tournament winnings. He plays for team OG, which is sponsored by Red Bull and has cumulatively earned over $11 million in winnings.

You may have noticed a complete absence of women on the graph above. The esports industry has long grappled with harassment and sexism, with the Gamergate scandal of 2014 being a notable example, where male gamers organized to target and harass women in the industry. But for elite gamers, much of the sexism comes from the fans themselves. So the next step of our study was to compare the top 10 biggest female esports stars on Instagram with the top 10 biggest stars under 18.

Immediately, we noticed that the most-followed female gamer earned 29 times less than the most-followed male gamer. It's worth noting that some tournament earnings are low simply because fewer esports players participate, so even those winning more tournaments may have lower total earnings. That said, the trend of men earning more than their female counterparts was stark.

The most-followed female player was Imane Anys. Her Instagram, which currently has over 5 million followers, showcases not only her gaming skills but also her ability to create content. From tournaments alone, however, she had earned only $20,775 thus far. Compare this with Kyle Jackson, who had 3.5 million followers on Instagram, but had earned over $500,000 in tournament winnings already. In order to combat sexism, some women have reverted to hiding their gender online, while other organized groups are attempting more systemic change. It's certainly an issue we'll be keeping our eye on.

Teaming Up on Social

Esports companies and players often wear multiple hats even within the singular industry. Sometimes they must work simultaneously as competition organizers, content creators, or even rights-holders. Their social media channels can actually help them accomplish all of this, and teams certainly make the most of this advantage. After all, a single organization can be responsible for financing a tournament and then broadcasting it, and the next portion of our study looked into these followings and earnings by team. 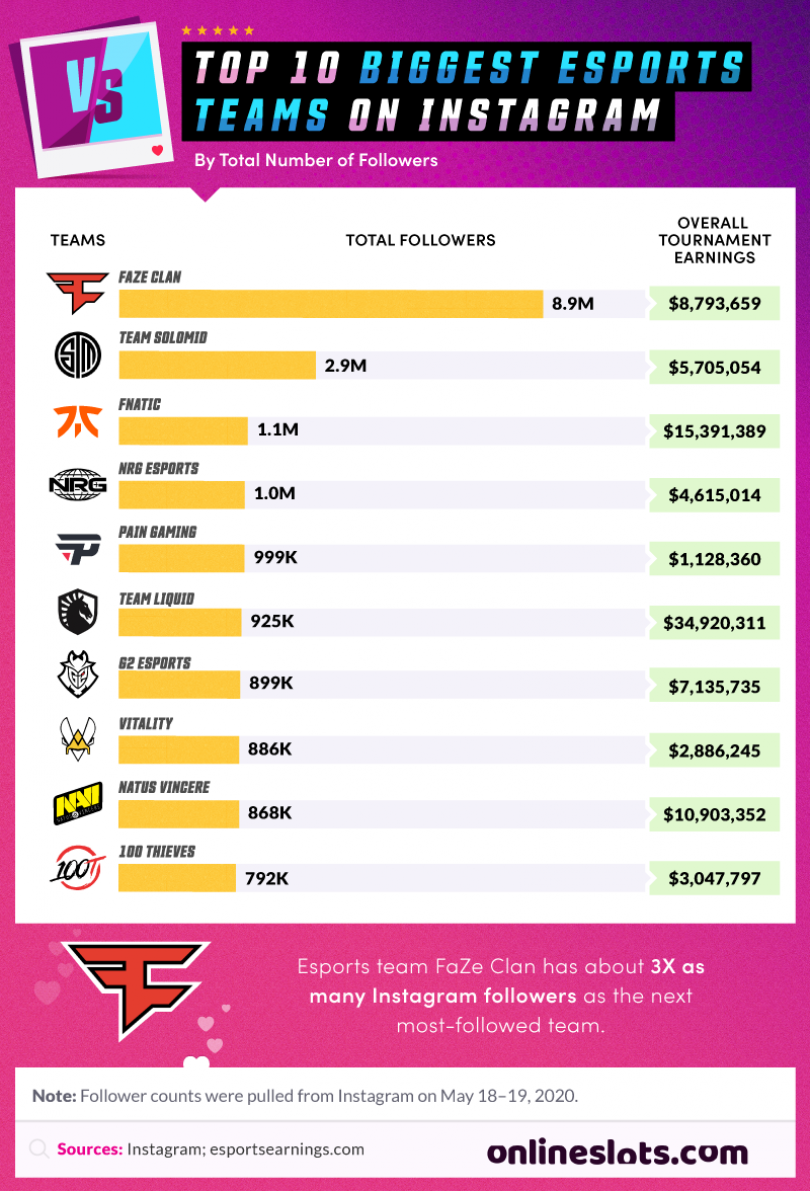 FaZe Clan had the most-followed Instagram by far. This team already amassed more than nine million followers, while the next most-followed team had about a third of that amount. That said, they weren't the top earners, though $8.8 million in tournament winnings isn't anything to scoff at.

In general, the prize money offered by these events and tournaments are mostly relevant for personal accomplishment and financial stability, but it's actually the sponsors who overwhelmingly contribute to team and esport revenues. With everything from branding to promotional content during streaming and exclusive deals, this is where the players and teams often make their money.

For instance, Faze Clan didn't earn nearly as much as the aptly named Team Liquid, even though they had fewer than a million Instagram followers. Their earnings from tournaments thus far, however, totalled a whopping $34.9 million, or nearly four times the amount of Faze Clan. Teams like Fnatic and Natus Vincere also earned more than Faze Clan in spite of their smaller Instagram followings.

Another reason Amol Bharti called social media one of the most essential parts of esports was the fact that matches between top teams are broadcast live directly on these platforms. He added "making people aware of the broadcast schedule via social media is the key to the success of the event." For this portion of our study, we focused specifically on the biggest esports games, the number of followers each had, and the total prize money they'd awarded. 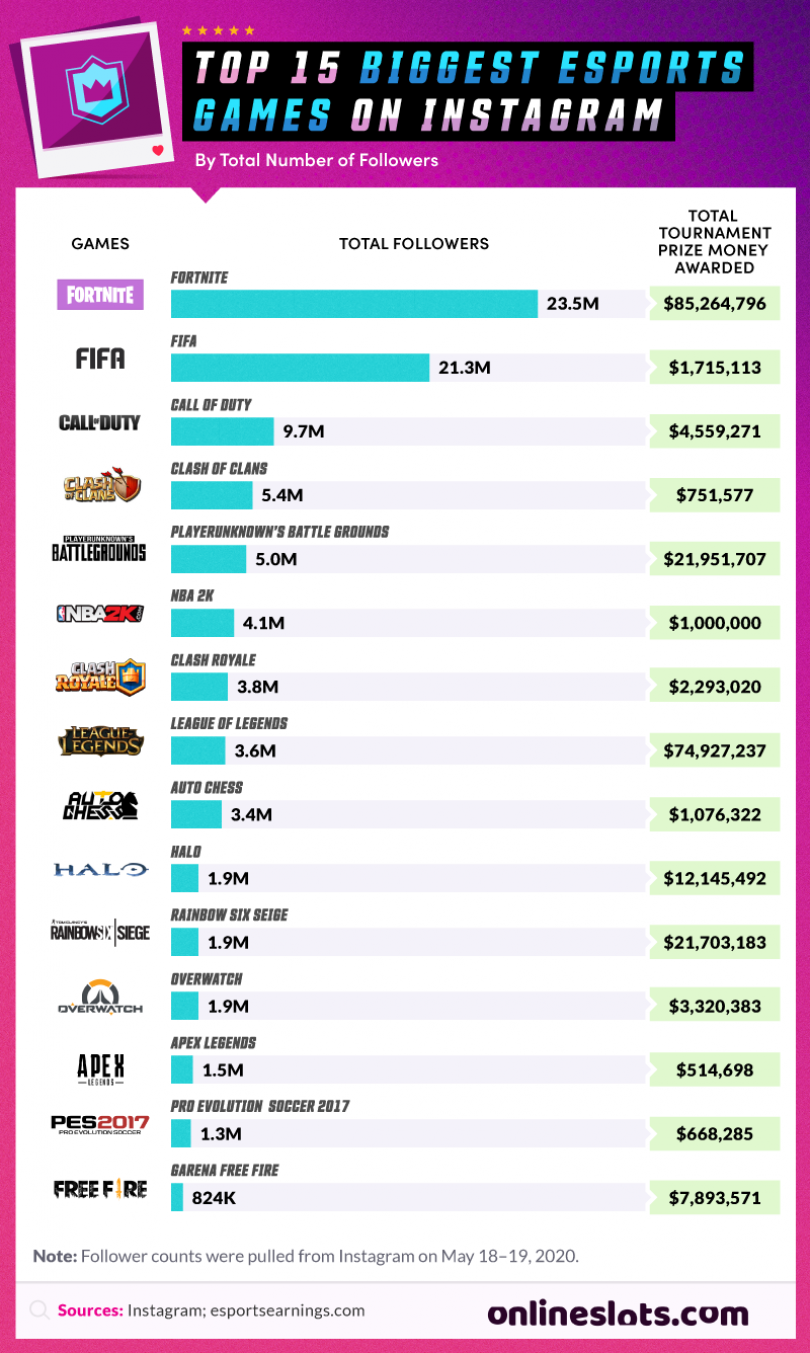 The games themselves even developed an online persona of their own. The most-followed game, Fortnite, has become highly music-oriented, pulling top-tier talent like Steve Aoki, Deadmau5, Dillon Francis to perform live at their events. Thus far, they've earned over 23.5 million followers. This game also appeared to be the only instance where the top most-followed was also the highest earning: Fortnite has awarded over $85 million in prizes already.

FIFA was the next most-followed game account. With 20 million followers (and counting), FIFA has followed the likes of others and used its account to promote social justice, specifically with regards to the Black Lives Matter movement recently. Their impact in terms of prize money, however, was relatively small. The game has awarded less than $2 million in total cash prizes thus far. Bear in mind that they've also pledged $1 million to fighting racial injustice. And although League of Legends didn't have very many followers, those numbers didn't stop them from awarding massive prizes. So far, they've given nearly $75 million. Their Instagram account appears to be exclusively game-oriented.

The Most Social Sports

Despite the widespread and total disruption the coronavirus brought upon most sports, many athletes (esports and non) took to social media to find new ways to connect with fans while their respective sport may have been on hiatus. The next part of our study compared the followings of more traditional professional teams (e.g., NBA, NHL, etc.) against the esports teams and players whose careers had essentially been born online.

The NBA was the most-followed sport on Instagram, with their teams having an average of 3.4 million followers each. The NBA was the first major sport to shut down its in-person game offerings amid the pandemic, and some teams and players immediately got creative online. Steph Curry recently used the platform to connect with his fans on IG live. His team, The Golden State Warriors, was actually the most-followed one, but players across most teams took to the platform readily this season, often to teach about the coronavirus and how to stay safe.

This wouldn't be the only time teams have married social justice with social media. The NFL was the second most-followed sport on Instagram, with the New England Patriots taking the lead in terms of number of followers. Their team has used several recent posts to show support for the Black Lives Matter movement, as well as LGBTQ rights. Esports, who ranked third after the NFL for number of followers, has also seen many of its most popular players and teams switch their bio links in support of Black Lives Matter.

If social media was crucial for a team's success, it wasn't necessarily reflected in tournament winnings. Very few of the most-followed teams were earning the most this way, although they may be compensated heavily through sponsorships. And although esports followings haven't surpassed those of the NBA or NFL, they are seeing huge surges in support and fanbases, and have already passed a few major leagues, like the MLB and NHL.

If esports continues going the way it has, we can only assume we'll see more followers and more prize money. Considering how many players have also used these online voices to uplift various social justice movements, we'd also have to assume this is a good thing. Even if esports isn't your thing, we'd recommend browsing the accounts of some of the players discussed in this study. They're certainly up to some wonderful and diverse things!

For this study, we pulled the follower count of esports athletes and teams on Instagram. Metrics were also collated for the NBA, NFL, MLB, NHL, and MLS. Follower counts were pulled from Instagram on May 18–19, 2020. The limitations of this study include the possibility that follower counts may have fluctuated since the dates they were initially pulled due to trades, injuries, and retirement. Also, not all accounts were verified, specifically for esports players, and not all esports players had an Instagram account.

Perhaps this article has left you feeling particularly social. If you know someone who you think would be interested in this data, you are welcome to share the article with them online. We do require, however, that your purposes are noncommercial and that you link back to this page so the authors can receive proper credit for their work.