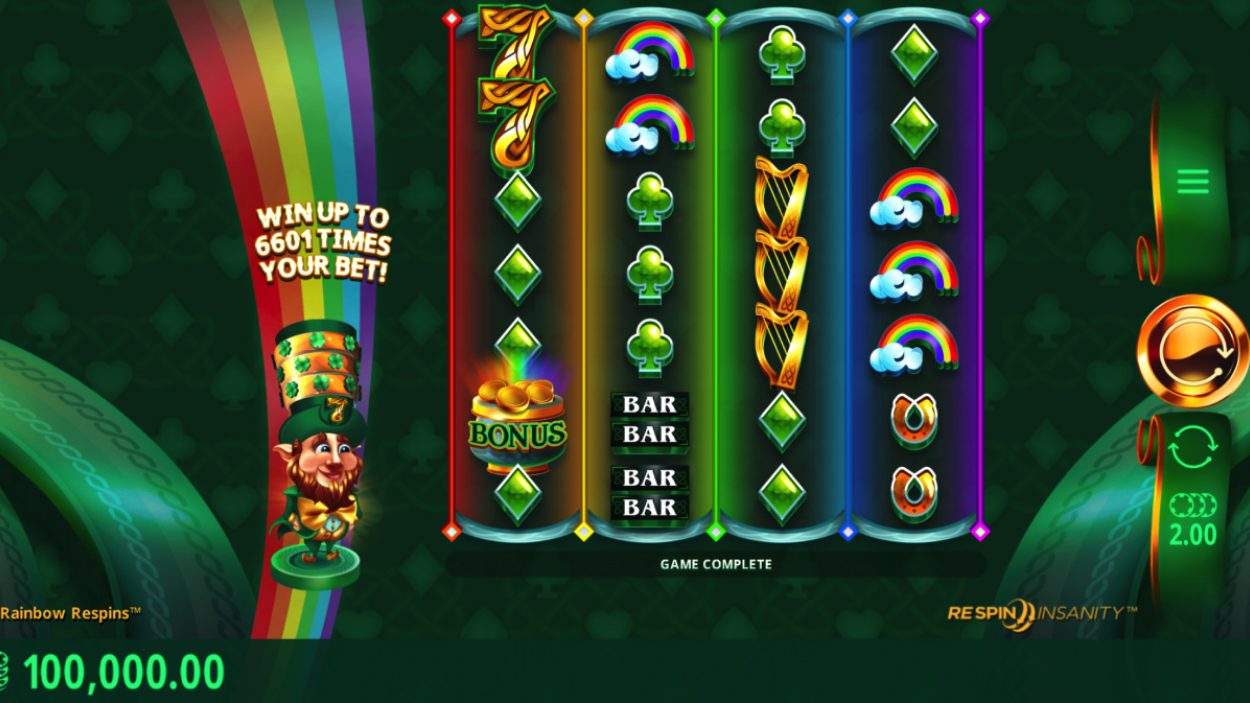 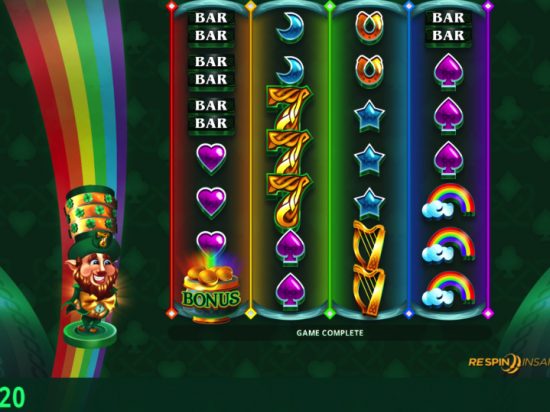 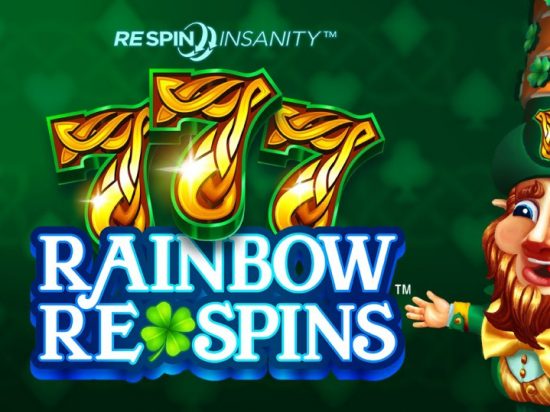 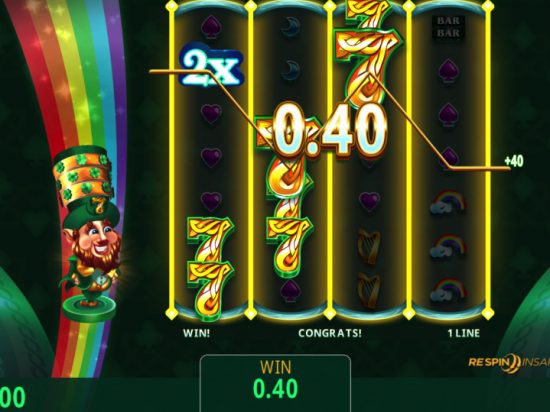 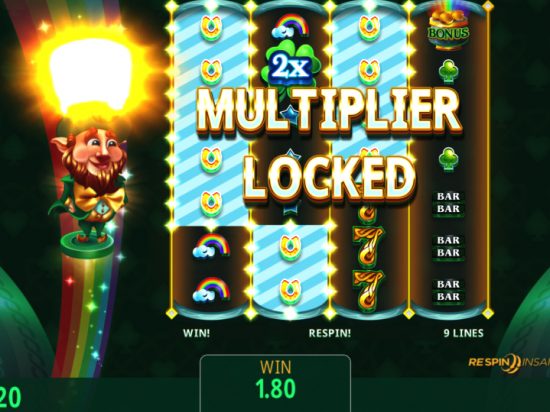 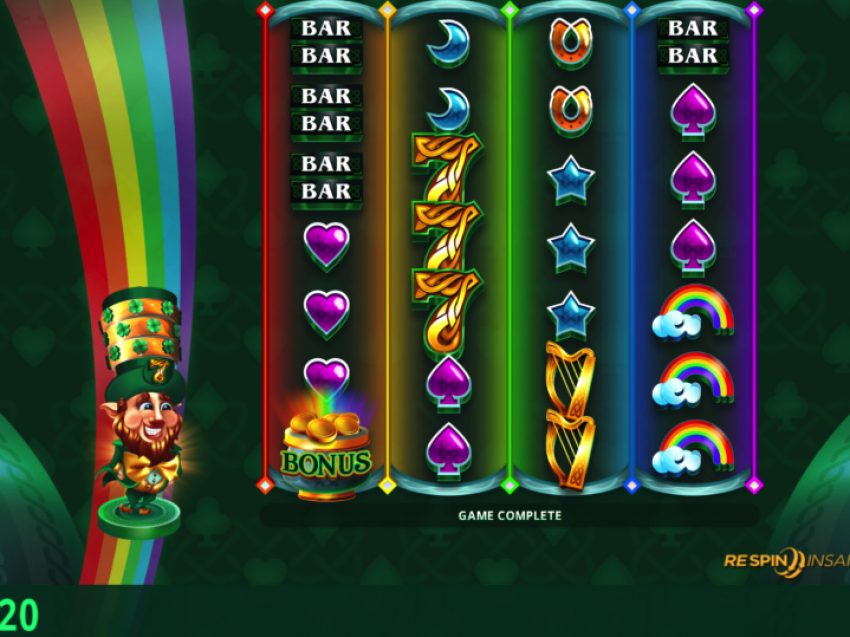 Online slots with a lucky leprechaun theme have been done to the end of the rainbow and back. So finding an exciting slot with an Irish luck theme can be challenging. 777 Rainbow Respins from Crazy Tooth Studio (powered by Microgaming) is oa game that rises to the challenge of making a unique Irish slot. Sure, you may not be getting anything unique from the theme, but the reels reveal some exciting features. So, join us below as we try to find the gold at the end of the 777 Rainbow Respins slot.

Crazy Tooth Studio has clearly gone for keeping things simple with a primarily solid green backdrop. Sure, this game doesn’t bowl you over visually, but graphically it performs well. The same can be said of the audio, which is a nice flighty piano/drum soundtrack that both evokes casino background filler and traditional Irish music.

Spinning the reels of 777 Rainbow Respins will cost you between $0.20 and $40, a solid spread that welcomes both budget players and high rollers. The jackpot of 6,500x your stake is acceptable but may put off those large jackpot chasers out there. You'll need to trigger the Respins round to get your hands on that top prize.

One of the best aspects of this online slot is how easy it is to enter the Respin Insanity feature. In fact, all you need to do is land any winning combination in the base game. The standard 2x wild symbol can help you by replacing icons to help form winning combos while also multiplying the win.

Respins Insanity serves as the 777 Rainbow Respins free spins feature. It is worth remembering that standard free spins will give you a new spin on the reels. Respins will lock symbols in place and spin the remaining icons. When you hit a paying symbol in the Respin Insanity feature, it is held in place while all other non-wild symbols respin.

Seeing three scatter symbols on the reels will open the bonus game, transforming winning symbols into a 2x wild or a 5x wild. It is only possible to land the 5x wild in this bonus feature.

With the 777 Rainbow Respins RTP set at 96.10%, the slot is bang on average, and we consider it a game worth playing. That jackpot is solid, but we would want it to be a little more lucrative with the high volatility. The lower bet limit of $0.2 will suit players on a budget, but the maximum bet limit of $40 may put off high rollers.

Still, the math model is overall consistent. It is worth noting the game also has two lower value RTPs, so check the game details at your casino of choice before playing.

While the Respin Insanity feature is exciting and help stack wins, this is still a lot I would only recommend to beginners or intermediate players. More experienced players or high-rollers may want to see more in terms of consistent big wins. Even so, with its slick lucky theme and strong base game, this is a slot that you can start playing today with minimum fuss. 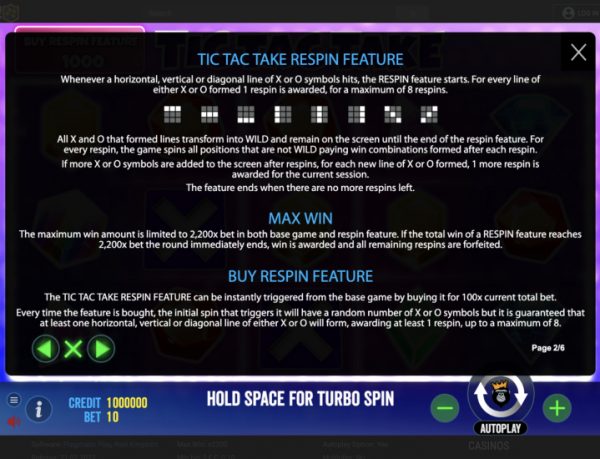