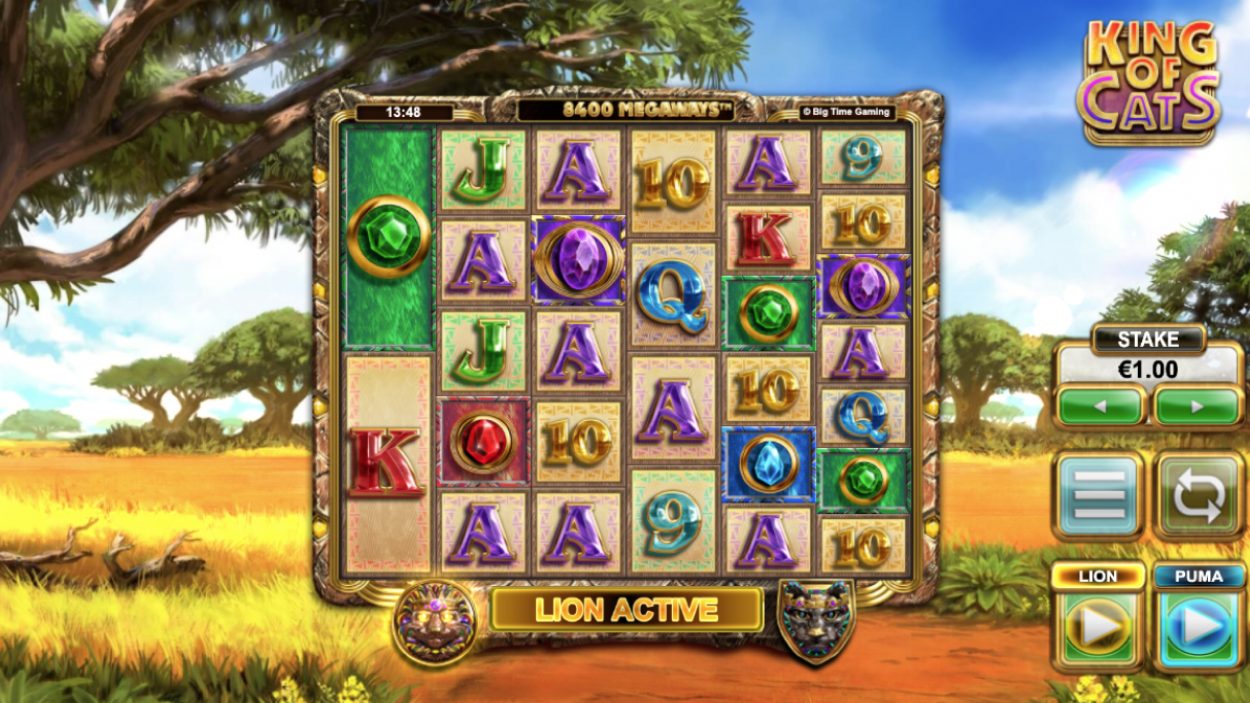 High volatility that won't appeal to all 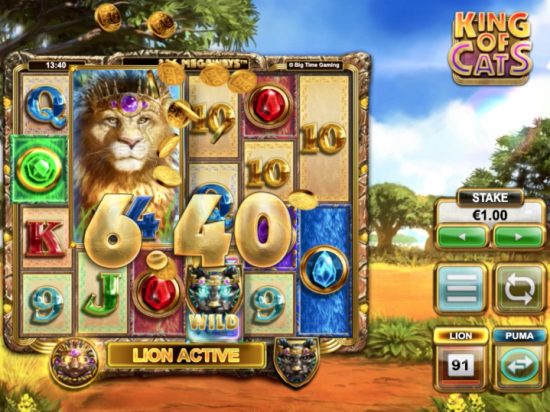 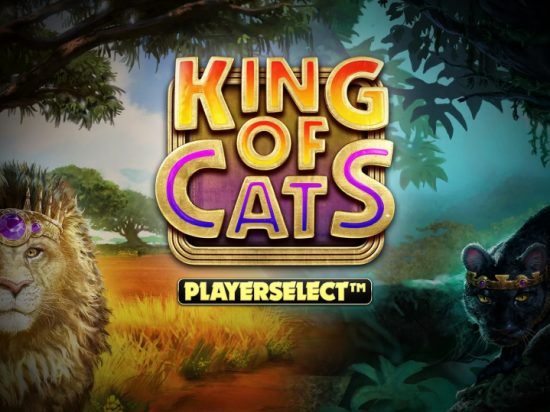 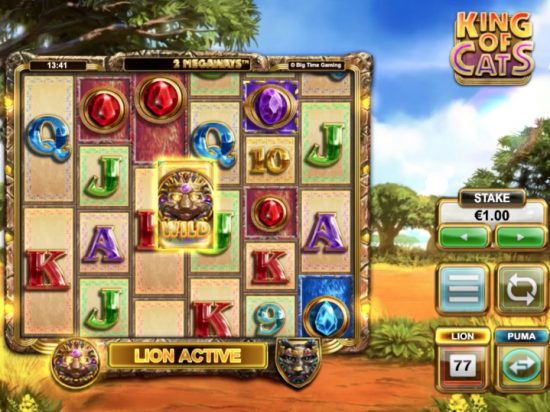 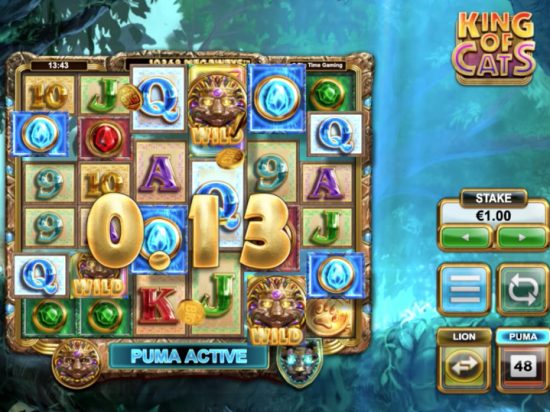 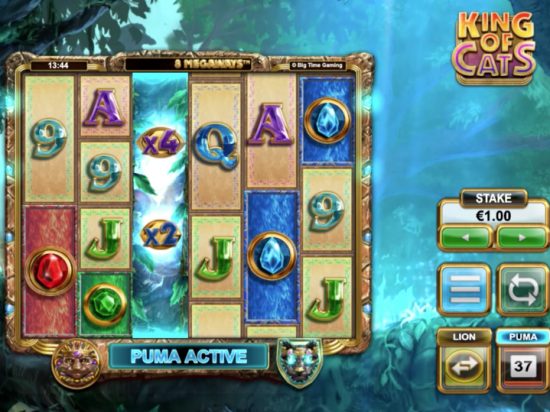 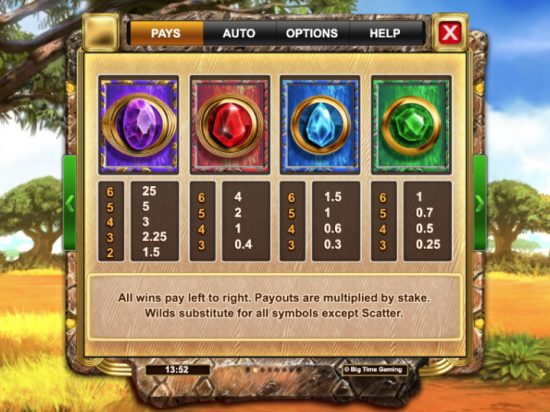 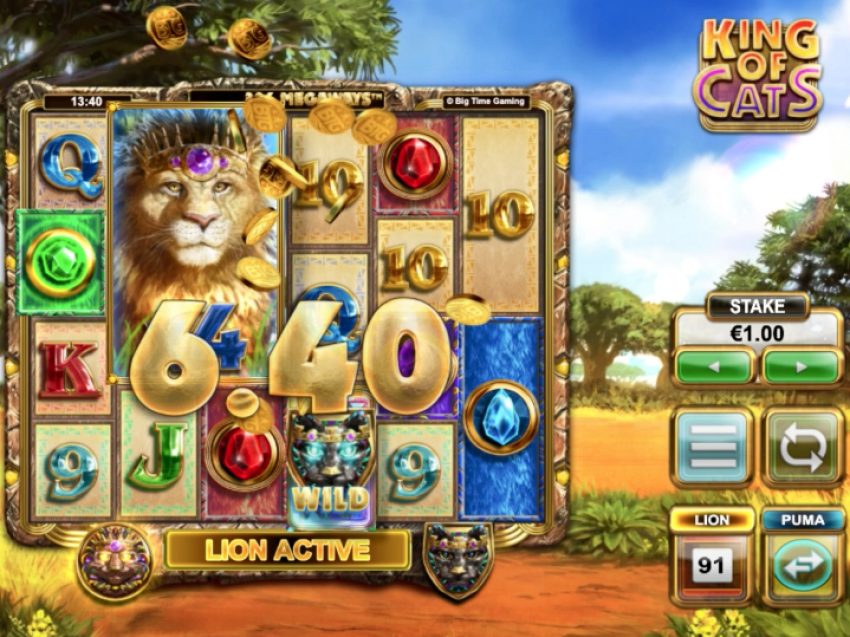 Walking through the savannah or jungle can be dangerous, with deadly predators just around the corner. Or, if you spin the reels of the new King of Cats Megaways slot, it can be a lucrative journey where you can win up to 56,620x your stake. With such a big jackpot on the line and a brand-new mechanic to try out, we couldn’t wait to start of King of Cats Megaways review. So, let’s roar into action and get straight into it.

King of Cats is a March 2022 release from Big Time Gaming, the company that invented the Megaways mechanic. As well as featuring the random reel modifier feature, the game is the first slot to boast the PLAYERSELECT engine. We’ll get into the specifics of this new slot and game rules below, but for now, we'll just say it means you can choose between different game modes.

This slot has a double theme, with two modes: Lion Mode or Puma Mode and picking one will influence the look of King of Cats. You are on the hot savannah when spinning in Lion Mode, while Puma Mode whisks you off to the jungle. Both settings look good, although the backdrop is the kind of landscape that is screaming for animation instead of static drawn visuals.

When firing up the King of Cats Megaways slot, the game begins by allowing you which game mode to choose. We can really see the PLAYERSELECT system becoming the next big thing in the online slot realm. Whether you choose Lion or Puma, the symbols on the reels are mostly the same. Speaking of reels, you play across six reels and expanding rows and paylines courtesy of the Megaways mechanic. In total, there are 117,649 ways to win.

Regular royals symbols (10 to A) and gemstones make up the low-paying and medium-paying symbols, respectively. The Lion and Puma symbols act as wilds within their own game mode. As you might expect, both modes have different gameplay dynamics:

The Lion wild is a multiplier that can create a 2x2, 3x3, or 4x4 colossal wild offering multipliers of 4x, 9x, or 16x. During the base game, betting the highest wager and getting the 16x multiplier, you can win 6,060x wins. There are also two King of Cats Megaways free spins round, starting with the Lion Mode.

Puma Mode is the more lucrative of the two games but also has a lower RTP. Here, the Puma wild symbol can expand to cover a whole reel, offering multipliers of 2x, 3x, or 4x. The base game jackpot is lower than Lion Mode at just 1,070x your stake.

You really need to be in the free spins round, which you unlock by getting 2, 4, 5, or 6 scatter symbols to gain 15, 18, 21, or 24 instant free spins. Puma wilds during the round have multipliers of 2x, 4x, or 6x and increase by 1x each time it lands. If the reels and symbols are on your side, you have a chance to win the colossal 56,620x your stake jackpot.

The King of Cats Megaways RTP changes depending on which mode you choose. It is 96.7% in Puma Mode and 96.71% in Lion Mode. Let’s be honest, the change is negligible, and both are above average. The game’s variance is high either way.

A minimum bet of $0.20 means budget players will enjoy this slot. While the $20 max bet is relatively small, it is worth remembering the jackpot is 56,620x your stake. In other words, high rollers are definitely welcome. If you’re after an innovative slot title, King of Cat Megaways with the new PLAYERSELECT engine is the place to be. Pay a visit to the jungle or savannah today and see if you can grab that lucrative jackpot. 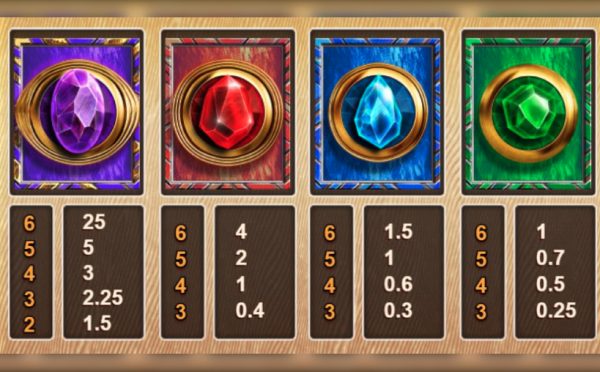